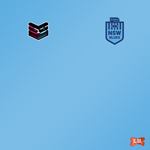 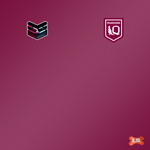 1. Ponga - "Picks himself".....Sadly. He's damn lucky QLD aren't exactly flush with form fullbacks at the moment that's for sure.
2. Oates - Has played Origin before, is in great form, deserves to be there and will be I think
3. Gagai - Origin experience, decent form, not flush with choices in the centres
4. Holmes - Same story as Gagai. Existing Origin experience, solid form, not many other choices
5. Coates - Yes I wanted to put Cobbo here, but you guys are kidding yourselves if you think Slater isn't picking as many Storm players as possible
6. Munster - Picks himself
7. DCE - "Picks himself" quote unquote, but you could almost argue Hunt deserves it more on form. Hunt however just can't deal with big stages so that is what benches him
8. Papalii - No one else really that is a feasible option. Has been decent in a bad Canberra side
9. Grant - Picks himself
10. Fa'asuamaleaui - Another one that feels very iffy given the form of his club but you aren't exactly going to start Flegler at Origin level are you.
11. Capewell - Rusted on incumbent, won't be overlooked
12. Kaufusi - Rusted on incumbent, could definitely question his right to selection but again, Slater is coach.
13. Arrow - Rusted on incumbent, should probably be benched in favor of Carrigan but won't be.

14. Hunt - In the best form he's been in since leaving the Broncos. Can cover two positions and can tackle solidly. He'll be there.
15. Fotuaika - Very unsure about this one but the bench was always going to be a struggle for us this year
16. Carrigan - Not believing this Reuben Cotter talk for a second. Carrigan is in career best form and deserves to be there, if only to square up on Haas
17. Fifita - Doesn't deserve to be there, but the media hype train will see him picked regardless

Cobbo and Flegler will go into camp but I doubt they play on the night.

I Bleed Maroon said:
Not believing this Reuben Cotter talk for a second.
Click to expand...

I Bleed Maroon said:
10. Fa'asuamaleaui - Another one that feels very iffy given the form of his club but you aren't exactly going to start Flegler at Origin level are you.
Click to expand...

You're off your head, he was the Titans best player by mile against us last weekend, arguably the best player on the field in a beaten team as well

blaza88z said:
You're off your head,
Click to expand...

That’s a good QLD team, this could be the best origin series in a while.

That merkin has about 3 heads, mere mortals like myself only have the 2

Queensland have the better side on paper. $2.50 is an absolute steal.

NSW side updated in number order:

A centre on the bench over a utility who's also a better player.

Space cadet being the space cadet.

Crichton starting at left centre with the Simple One on the bench as utility makes sense. The other way around is some what bizarre considering Crichton has played a fair bit of left centre next to Luai.

Plenty of pashen in that Queensland team.

AlwaysGreen said:
Plenty of pashen in that Queensland team.
Click to expand...

Val Holmes lined up against the biscuit Staggs is where we’ll leak.

Complex Jack is a good pick, Crichton should be right centre - he and Val handled each other well on the weekend.

And Hynes should be utility with Staggs left out.

Mr. Shaman said:
Val Holmes lined up against the biscuit Staggs is where we’ll leak.

Complex Jack is a good pick, Crichton should be right centre - he and Val handled each other well on the weekend.

And Hynes should be utility with Staggs left out.
Click to expand...

** Limp Biskit
You must log in or register to reply here.