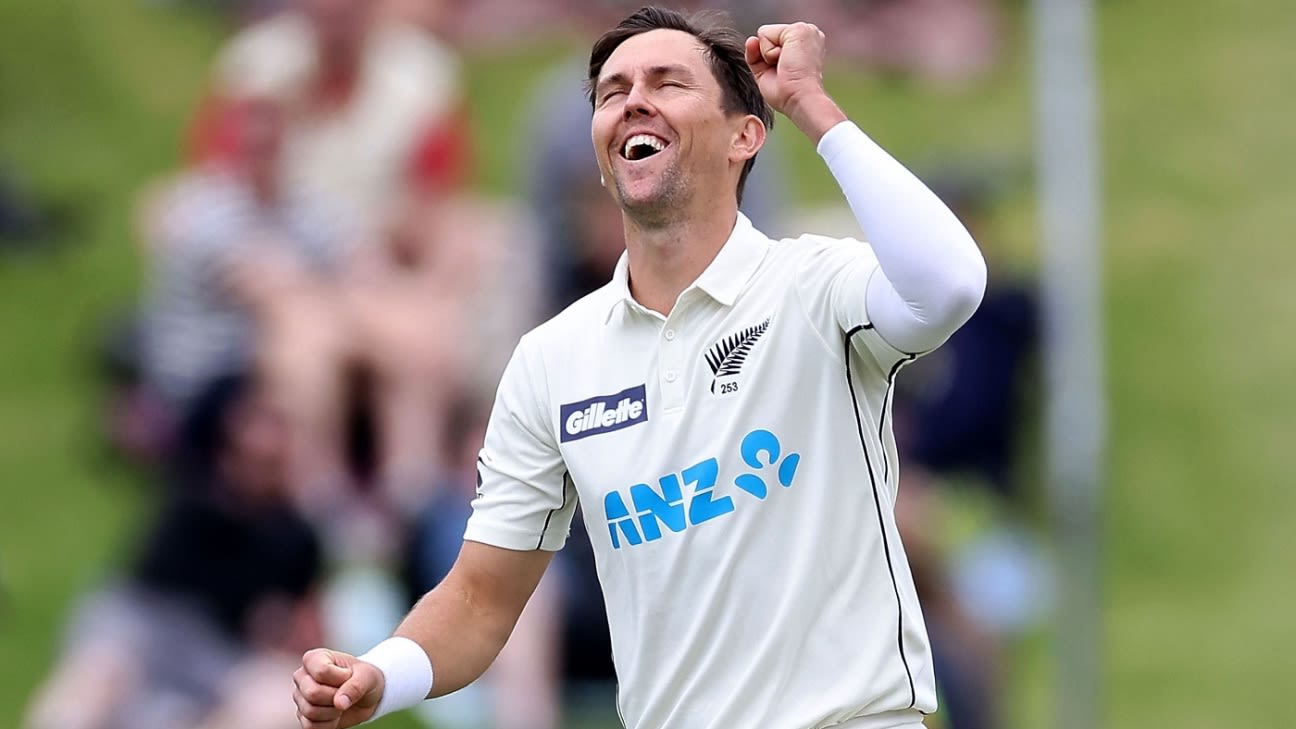 Boult is out of isolation "three or four days earlier than expected," coach Gary Stead says

Trent Boult is firming as a chance to play the second Test against England at Edgbaston starting June 10, having previously only been inked in for the World Test Championship final against India.

Boult joined the New Zealand squad late last week having opted to return home after the aborted IPL rather than head straight to the UK.

Before the opening Test, coach Gary Stead indicated the turnaround for Edgbaston would be too tight for Boult but updated quarantine protocols have allowed him to train immediately after arriving which has advanced his preparations by a few days. While a final decision on whether he plays on Thursday will not be taken for a couple more days it would now be a surprise if he did not line up.

"There's a chance, there are a few things that have changed," Stead said after the drawn first Test. "The British government has relaxed their quarantine stipulations so Trent is out of isolation three or four days earlier than expected.

"The original plan we had in place with all the information we had at the time was we weren't going to play him in the second Test, but coming out of that isolation probably three days earlier than what we originally anticipated does put a slightly different spin on it. So we'll weigh up the pros and cons and work out with Trent what we think is the best course forward to make sure he is fit and raring to go for that final.

"Trent is more keen than he was a week ago and that's because he's over here now, he's part of the environment. Probably right now it's a bit early to make that call, he's only been here 48 hours and probably still suffering a little bit of jet lag."

If Boult was available for Edgbaston somebody would have to make way from the attack that featured at Lord's and had England under pressure almost throughout. It could present the chance to manage the workloads of Tim Southee (42.1 overs at Lord's), Kyle Jamieson (41 overs) or Neil Wagner (40 overs) ahead of the WTC final against India with Southee perhaps the frontrunner to be rotated.
J

Hope so, bit of a selection dilemma though... no spinner? Essentially that’s the case if they pick Santner anyway

only concerns atm are the form of Taylor and Watling, neither will be replaced though
J

Looks like the IPL is being rescheduled to the UAE, No dates announced as far as I can see, so am assuming it restarts after the Championship test final (after 23/6), so Indian players can play. If it restarts earlier, then India could field a weakened test side, firming the kiwis even more
J

I think we are - provided Williamson's elbow is ok - English conditions are a little like ours, India doesn't go well here... wicket will be interesting for that one, how much sway does India have in terms of removing grass?

you definitely are favs

NZ have the best Mullet in world cricket, they are certs IMO.
J

hineyrulz said:
NZ have the best Mullet in world cricket, they are certs IMO.
Click to expand...

In hair we trust.
J

Williamson officially out…. Hope this doesn’t turn out like Crowe’s knee…. Give away the hit and giggles shit, and NZ cricket should try and pay him properly

JJ said:
Williamson officially out…. Hope this doesn’t turn out like Crowe’s knee…. Give away the hit and giggles shit, and NZ cricket should try and pay him properly
Click to expand...

Just this test? the test championship as well?
J

Just this test? the test championship as well?
Click to expand...

just this one, they’re saying
J

The pitches for both tests have been really poor, absolutely no pace and bounce in either.

Resting the likes of Watling for a niggle is understandable, I don't know why someone like Jamieson can't play though. He's had 7 tests in his life, surely he could do with as much cricket as he can get in English conditions?

Henry is no chance of playing next week so it's seems pointless to me having him out there right now.

still staggered we made 6 changes and still have a decent side… doubt very much we’ve ever done that in a series, on the past 6 changes would have meant we’re a club team
J

Trent Boult has been a poor test bowler for the last few seasons. Too much white ball crikcet has ruined him in tests, has no patience what so ever.
You must log in or register to reply here.