St George Illawarra’s multimillion-dollar skipper Ben Hunt has pleaded with passionate Red V fans to wait at least a month before launching a fresh attack on the perennial underachievers.

While Hunt is clinging to faint hope Corey Norman escapes an NRL-imposed one-match ban for his Cronulla street fight and is free to partner him in the halves for next weekend’s opener against Cronulla, he also knows patience will be required from supporters. 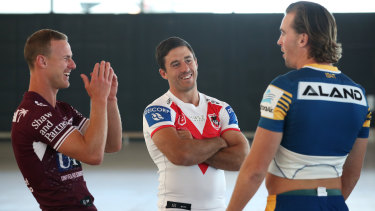 Did you hear the one about the Dragons collecting the spoon? Ben Hunt with Daly Cherry-Evans and Clint GuthersonCREDIT:GETTY IMAGES

Dragons fans were fuming after the 48-16 Charity Shield blowout, with plenty in the game expecting new coach Anthony Griffin to collect the wooden spoon.

They have made the finals just twice in the past nine years.


Hunt described the club’s fans as much more savage than the Broncos supporters he once played for, and a group who had at least something to cheer in terms of finals appearances over the past decade.

“You saw how we went last year, then we come to our first semi-serious game [last weekend] and we dished that up, so I can totally understand what the fans are looking at,” Hunt said.
“I think we got some big lessons out of that game.

“But give us a couple of months. We have a new coach, new staff and new players. We’re changing how we defend. It’s going to take time.
“After five or six rounds if we’re still throwing that up, then fly into us.

“The [Dragons fans] are pretty savage at times. We had a fair bit of success at the Broncos so there probably wasn’t as much of a chance for the fans to pile on and really get into us.

“Down here we have had some bad years and the fans have stepped it up a notch.

“I’m new to the club and we haven’t done anything at this club since 2010. It’s been a while since we’ve had some success. The fans are getting a bit riled up.”


i think he is right and this gives me some hope that they are actually working on things that obviously will get worse before they get better. Mind you if things go pearshaped i wouldn't like to be in his shoes!
S

I don't think time will fix anything, we simply don't have the squad especially the forwards.
I

Seeing results...can be patient for half or even the whole season. Seeing effort, one week!
Last edited: Mar 5, 2021

We have to be better than last year right?
L

saintly1996 said:
I don't think time will fix anything, we simply don't have the squad especially the forwards.
Click to expand...

Some relentless in-your-face forward linespeed would at least show that the coaches have worked on commitment & attitude?

Linespeed is not a difficult or special skill

- even for the talent challenged.

It’s a barometer of laziness

The energy or otherwise will be there for all to see in the opening minutes come Sunday.

And I’m afraid Hookie that’s a coaching-inspired thing that sure don’t take a month to fix eh Benny?

Fair enough, I'm glad he recognises the side hasn't done anything since 2010.

JohnnoMcJohnno said:
Fair enough, I'm glad he recognises the side hasn't done anything since 2010.
Click to expand...

saintly1996 said:
I don't think time will fix anything, we simply don't have the squad especially the forwards.
Click to expand...

This is it! Yes, under a new coach and some changes in the roster it will take us time to improve but that doesn't mean we will win games. All of the other teams in the comp will be lifting with intensity but theirs could be higher intensity compared to us so the outcomes will be all relative.

A marked improvement in game plans is needed together with more power and line speed in defence.

It could very well be that after the halfway point in the comp, the systems in place and the players gelling just might get us a string of wins.

Winning against the Sharks will help our mindset for sure and from that they can improve as the comp progresses. I'm hoping so.

Obviously unlearning what they've been coached to do for the last few years will take time. Number one concern is their defence and last week was as bad as it gets, it was a mess. It will take time to fix and it will be best done on the field in real conditions against real opposition. You can only learn so much at training and from video sessions. Hopefully we'll employ a long and early kicking game for the early rounds so we're defending at the oppositions end of the park as much as possible.
I'm happy to give the boys and Hook time, it's what we've been waiting 10 years for so C"est la vie, suck it up and think of better years ahead.

EDIT : From Round 7 to 13 we'll have 7 games in a row broadcast on free-to-air telly, Channel 9 and mostly against quality opposition. Hopefully Hook will have us firing by then and possibly have found us a couple more forwards ( or JDB ) and we can put the Mary era behind us.
Last edited: Mar 5, 2021

It was the departure of Harry Sjeika which hurt us the most I think..
S

Hunt sounds like he has learned a few things from Mary about preparing your excuses early.

Defensive structure is one thing, but being able to execute in clutch moments is another. Hunt has had years to work on this, what difference will another 6 weeks make?

He’d be well served to shut up and let his footy do the talking. We desperately need a leader, and he is going to need to step up.

Draginzaaar said:
We have to be better than last year right?
Click to expand...

Somehow I don't think so. We have lost Frizell and McIness for the season and they are replaced with ????.

Prepare for the worst, hope for the best.

In such a roundabout way, it was a very veiled swipe at the previous regime. Why would changing a 'few' structures take such a long time to learn and complete successfully if the structures if the past weren't so ingrained in your psyche?
What you practice at training is so removed from the realities of actual game time, like dropoingvyour bundle after they scored (Souths in the CS).
Yes it may take a few games to click, however, the big test is against the Sharks, who I rate about equal with us for season 21.
A win would go a long way to silencing the mob.

Any fan who expects we can magically transform into playing quality football with the amount of upheaval we have had recently is kidding themaelves.

Give them time to adapt and let's see how they develop.

We are copping enough from everyone else, at least us fans can be patient...
S

Any fan who expects we can magically transform into playing quality football with the amount of upheaval we have had recently is kidding themaelves.

Give them time to adapt and let's see how they develop.

We are copping enough from everyone else, at least us fans can be patient...
Click to expand...

I’m happy to be patient in the right areas.

Dropped balls in new attacking structures, or being isolated or making a bad decision in a new defensive structure. These things are understandable.

Things I won’t forgive are not contesting loose balls, watching while others chase kicks, not attempting to make your ground on the inside, etc. Those are effort areas.

Also, Hunt kicking grubbers into the back fence. That shit has to stop.

We will give them time, 80 mins next Sunday. We are not an unreasonable bunch.

Time & Patience? FMD doesn’t he realise Dragons fans waited 31 years between premierships!
The last 10 years have also been a waste of time with 2 duds calling the shots whilst sending us deep into the Abyss.
Dragons fans can be very patient, but it’s wearing thin.

Oh Ben please don't compare us to the filth North of the border.