I don’t agree he expects it in 2024. And sometimes players take less to get out of a toxic situation.

macavity said:
Still blown away people are against getting Brooks, if (big if) we aren’t paying full freight.

is a good player in a terrible team.

He would be an upgrade on Pearce for us.

Moot point as the tigers won’t let him go.
Click to expand...

I think most of us can see there is a player in there somewhere but some problematic points would be:

Are we strong enough as a club to take that all onboard and succeed?

None of this fills me with confidence. Whilst Pearce hasn't set the world on fire over the last couple of years the halves market is pretty bare as it is and I'm not convinced that Luke Brooks would take us any closer to the summit than we currently are. That's if it was possible to get a deal done anyway, as it doesn't seem like the Tigers are keen to let him go.

All that being said Brooks does need a change as his form at the Tigers has been indifferent for a while now but he has showed at times that he's got a fairly high ceiling yet consistency has always been his issue. Also playing in a better team behind a better forward pack would no doubt help but I definitely don't want the club paying anywhere near full freight for him. In theory, if a deal were to be done it wouldn't be too bad paying around $500K for him and having the Tigers chip in the rest for a couple of years then re-negotiating from there. All of this is in theory though as the Tigers apparently want to keep him.

Jono078 said:
These are some names that I think we could realistically get, whether you'd like them or not is another thing..

Pick of that bunch is probably the top 2. There's some there that are probably too similar to Clifford. Flanagan had a terrible season and I'm not sure what issues he has but I still feel he's a potentially solid First Grader.
Click to expand...

Here's my take on that lot.

Ash Taylor - Has the highest ceiling of any of these names and would be worth it on a short term/low money deal but looks like the Warriors will have him for 2022.

Chanel Harris-Tavita - Has plenty of upside and can defend well, I'd be open to signing him but not paying big money

Kyle Flanagan - Has gone from being a future star to being on the scrap heap. He can definitely play but there seems to be something not quite right given how things went at the Roosters & Bulldogs. I'm also not sure if I would want his father being involved with the club. I would pass on Kyle for now.

Lachlan Lewis - Not sure what this guy's ceiling is. Has looked decent at times playing in a bad team over the last few years and could do well with a fresh start elsewhere. I wouldn't mind getting him for a bargain price for a year or two to see what we could do with him. We could do worse.

Dylan Walker - No, he's a grade A d*ckhead and not even that good a player

Sam Williams - He's experienced and is a good organizer which we certainly have lacked over the years but has never really nailed down a first grade spot despite being around for a long time. I can't help but feel that we've already got a similar player in Clune anyway so would probably prefer to give him a go, but Sam Williams wouldn't be the worst signing.

Matt Frawley - He's a backup at best and I think Clune will do the same thing but better so probably wouldn't go there.

Ultimately there are a few guys on this list who I would be ok with getting on a short term/low value deal but none of them are a marquee half and we may have to rely on a few different guys at 7 over the next year or two until we even sign the right player or someone emerges from our current system.

"Tigers' director of football Tim Sheens shut down the rumours tonight in a statement issued to fans.

"Luke Brooks is contracted with Wests Tigers until at least the end of 2023 and, contrary to media speculation, will not be leaving the club," Sheens said."

macavity said:
Still blown away people are against getting Brooks, if (big if) we aren’t paying full freight.

is a good player in a terrible team.

He would be an upgrade on Pearce for us.

Moot point as the tigers won’t let him go.
Click to expand...

Youre on drugs mate

The Axe of Druss said:
Youre on drugs mate
Click to expand...

perverse said:
I bet I'm not the only one that got a giggle out of that line in the article.
Click to expand...

Did Joey write the article?
O

1 Ponga, Hodgson, Toa, 6 Clifford, Ponga, Crosslands, 7 Clifford, Clune, Crosslands. Others to consider are Baker, Sasagi, Hoy & Mann so if no Pearce we have plenty of cover that is maybe lacking in some areas but we could get by until someone comes on the scene realistically it’s Ponga, Clifford & Clune for 2022

Are we all forgetting we have a ready made super talent with lots of experience at #6?

How can you all miss what’s so obvious…

It’s obvious it was Pearce holding Mann back all these years. Now it’s time to unleash him on the NRL.

The Axe of Druss said:
Scary but thats probably how we'd line up Rd 1 2022 if Pearce leaves
Click to expand...

Jono078 said:
Are we all forgetting we have a ready made super talent with lots of experience at #6?

How can you all miss what’s so obvious…

It’s obvious it was Pearce holding Mann back all these years. Now it’s time to unleash him on the NRL.

AOB would be tempted to go;

AOB would be tempted to go;

This would actually work when you consider that Spazwing either drops the ball, throws a hospital pass or just takes the tackle when we have an overlap usually at the very first opportunity.

Who needs a separate fullback, 5/8, halfback or supersub when Spazwing will deliver what the coach expects (turnover of the ball) first time every time.

In saying that though, Mex Soy at fullback in combination with Spazwing is a mouth watering prospect. One will flap his arms like a chicken when running the ball, while the other will play the great disappearing act and not contest high balls. This circus act will bedazzle the opposition.

macavity said:
I don’t agree he expects it in 2024. And sometimes players take less to get out of a toxic situation.
Click to expand...

Lol you are dreaming.

I don't want to bash into AOB, I really don't, and I do want him to be a success BUT this really irks me:

“All I can say is I nor anyone at the club have heard from Mitchell or his management,” O’Brien said.

“He is currently scheduled to start training on the 24th of November and until I’m told otherwise, I have started planning for 2022 with Mitch as our halfback.”
Click to expand...

“I will cross that bridge when I come to it but I only live two streets away from him and I haven’t heard anything,” he added.

“Honest to God, I am not lying... I have not heard a single sentence.

“So I will just crack on and cross that bridge when I come to it.”
Click to expand... 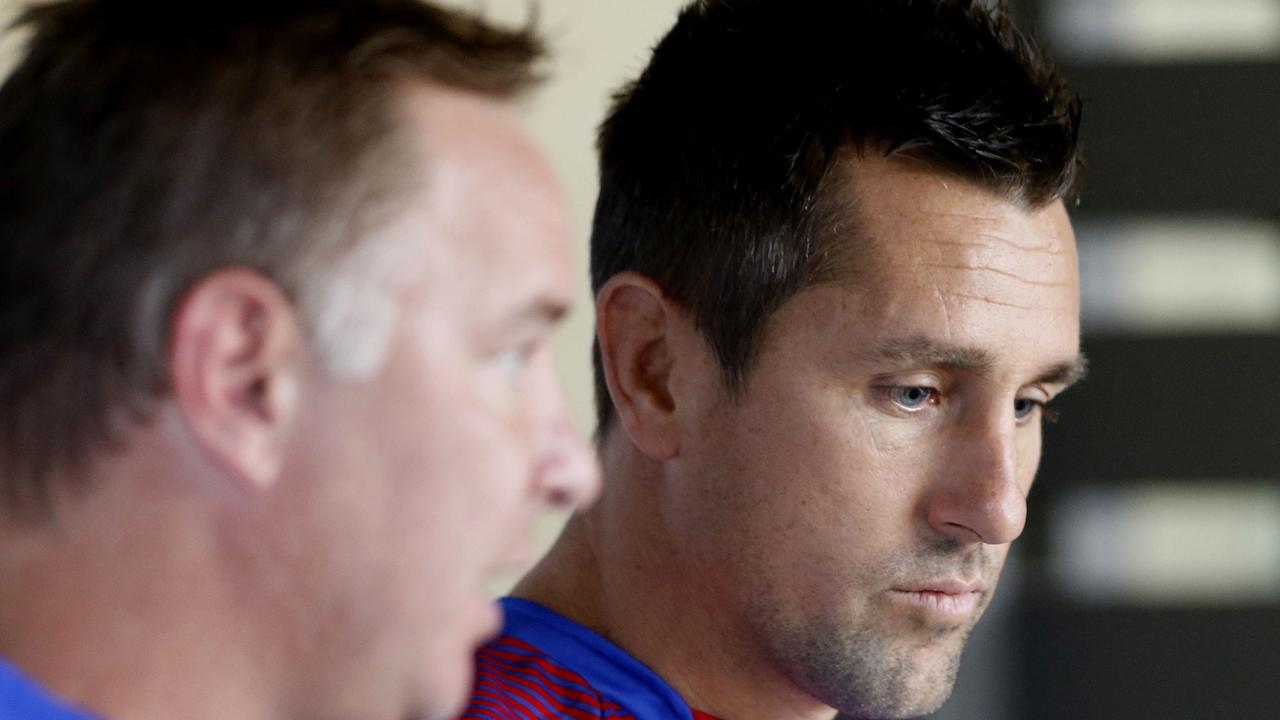 ‘I’m not lying’: O’Brien reveals Knights ‘haven’t heard anything’ from Pearce about release

‘I’m not lying’: Knights set for showdown with Pearce after O’Brien’s shock revelation

Let's assume AOB is telling the truth and he's heard nothing from Mitch... It's not very pro-active of him to address the rumors ASAP with Mitch and start planning accordingly.

Like I've just had a vision of his round 1 post-game conference where he says yeah the Pearce thing was a real distraction and we weren't prepared well enough..

I feel I'm over-reacting but it just irks me the lack of a pro-active response.

We want a transfer fee for Pearce. Understandable and perhaps the best way to go about it. EDIT: Hoops bringing up AOB's contract with the Roosters was also trash journalism, not that I expected any better from him.

Jono078 said:
EDIT: Hoops bringing up AOB's contract with the Roosters was also trash journalism, not that I expected any better from him.
Click to expand...

Club signs off on “get out clause”, then pack the poos when the card is played.

Hoops must be menstruating again.
O

All messy, nothing confirmed or denied but plenty on in media and here. If I was Obi I would want some clarity asap so I would have rang/visited Pearce and asked him for the truth and I would also have told Pearce that no matter which way it is that he could have rang Obi and clarified things even if just in confidence.
Both Obi and Pearce have handled this badly and if there is nothing to it then a joint statement was in order for the sake of club and fans
You must log in or register to reply here.
Share:
Facebook Twitter Reddit WhatsApp Email Share Link