Some pretty good stuff in there. Looking forward to Doom and Wolfenstein II

That third party support is pretty impressive for the switch and has finally convinced me to buy one so have the Mario bundle pre ordered those joy cons look great. Crash Bandicoot n sane trilogy has really rekindled my love for platformers from when I was a kid so can't wait for Mario and than Kirby and Yoshi in 2018. I hope we get a new Mario maker for the switch as that, Mario Kart and smash were the only games I really played on my Wii u.

Rockstar and Bethesda jumping on board is huge for Nintendo, even if it is mostly ports... I think ports have a lot more value on this platform than others due to the portability. In the same vein as the Wii, I think Nintendo might have again nailed the sweet spot to be everyone's "second" console.

The Switch could move a shitload of units in the next couple of years if the titles keep flooding in.

Every Nintendo Switch appears to contain a hidden copy of NES Golf
What's more, it might have a first for an emulated NES game: motion control. 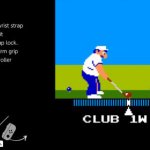 On Saturday, the world may have gotten its first look at an NES game officially running on a Nintendo Switch. You might think the weird thing about this news is how long it has taken for Virtual Console support to come to the Switch. But this isn't a Virtual Console story.

Turns out, this is somehow weirder. Your Nintendo Switch may already have a fully playable NES game just sitting inside of it.

The news has emerged from SwitchBrew.org, a depository of hacking and file-system analysis for Nintendo's latest console. After a major dump of "title" names from the system's file system in July, users there discovered a "title" in the system named "flog." The site's original stub about flog alleged that this title contained a fully fledged NES emulator, but it said nothing else.

Saturday's SwitchBrew update centers entirely around this mysterious flog entry, and it insists that this is an emulator wrapped around a single NES video game: the NES version of Golf first launched in 1984. ("Flog? That's 'golf' backwards!") According to poster "yellows8" (who previously created his own Github depository full of 3DS system exploits), this copy of NES Golf is just sitting on every Nintendo Switch console in the world, and it's been designed specifically for Switch compatibility. Possible screenshots of the emulator in action, shown above, even demonstrate Joy-Con golfing motion controls.

This is particularly wild, as no emulated NES game, even during the waggle-heavy Wii era, has ever officially supported modern control updates like motion or touch-screen controls. Nintendo says that its upcoming online service will add online support for classic NES games, but it hasn't announced motion-control upgrades or other gameplay additions to classics.

Yellows8 claims the emulator-wrapped game is installed on Switch systems dating back to the system's original 1.0 firmware. The user also writes that "it's unknown what exactly triggers launching this title." Could there be a button combo, Joy-Con motion command, or even Amiibo-driven unlock required? Or is this just a hidden proof-of-concept of Virtual Console fare soon to officially launch? And how exactly did yellows8 get these screenshots if the user couldn't load the hidden Switch game manually?

Update, 7:55 p.m. ET: In responding to Ars Technica's questions, the researcher yellows8 claims to have personally tested the version of Golf found pre-loaded on Nintendo Switch. Yellows8 did not confirm exactly how the game was accessed, other than to describe the access as "unofficial"—meaning, the game was accessed in a way that an average system user might not be able to replicate. (Whether "unofficial" access means root system access, a hardware or software hack, or another exploit remains unknown.) Yellows8 also confirmed having played the game using both traditional Joy-Con buttons and motion control.

A Nintendo representative was unable to offer an official company response as of press time. (Instead, the rep offered a "ha!")

Here's Doom running on the Switch, not the final version, they're still optimizing:

elyod138 said:
Here's Doom running on the Switch, not the final version, they're still optimizing:

Super impressive. AS much as I love 60fps (and much higher, to be honest), I'm willing to make a sacrifice on fps if it means I can play it on the go. If Nintendo can manage to get ports of 60fps games at even 30fps on the Switch then it'll be big for them. It seems like the Switch may well be good enough to do that. Both NBA2k18 and Doom seem to look really great considering the relative power of their competitors, even if it has to be 30fps.

Nintendo should go all-in on the portable aspects of the console - sell it as a portable that you can play on your TV on the fly. That seems to be the general perception of it anyway, and everyone loves it. They should retire the 3DS line over the next 12 months and focus all efforts on the Switch. Being able to play AAA titles this new (and this well) on a handheld is unprecedented, and has got everyone pretty hype right now.

I doubt even Nintendo anticipated how big the Switch would get and how quickly. They are the tip of the spear for the "portable home console". Now watch Sony follow suit. MS won't. They're on their way out of the industry by all accounts.
B

Has anyoned played NBA 2k or fifa on the switch. Are they any good? I have a PS4 which I only really use for sports games and am looking at getting a switch instead

I Bleed Maroon said:
I doubt even Nintendo anticipated how big the Switch would get and how quickly. They are the tip of the spear for the "portable home console". Now watch Sony follow suit. MS won't. They're on their way out of the industry by all accounts.
Click to expand...

Nintendos consoles seem to be insanely popular or massive duds. Looks like they've struck a winner with the switch. Well done to them for continually pushing the envelope.

Love to get peoples thoughts on this console now they have had it for a while. Are you still playing it? Whats games are must haves etc.

Dogs Of War said:
Love to get peoples thoughts on this console now they have had it for a while. Are you still playing it? Whats games are must haves etc.
Click to expand...

I love mine to bits. Compliments my PC gaming perfectly, as anticipated. Hell i've re-bought games like Stardew Valley for the Switch because it's actually a better platform than my PC to play it on - and that isn't something you'll catch me saying about any other console, ever.

I've only had mine for a month but I'm still smashing Super Mario Odyssey when I get the time to play.

I have the Legend of Zelda waiting next!

Dogs Of War said:
Love to get peoples thoughts on this console now they have had it for a while. Are you still playing it? Whats games are must haves etc.
Click to expand...

Best console I've ever owned (I have a ps4, have had an xbox and various Nintendo consoles).

The portability and pick up and play nature of it makes it so much better than anything else, while still maintaining the ability to dock it if you want to play on a bigger screen with the pro controller (which is excellent), like a more traditional console.

Mario and Zelda are both great. looking forward to getting into some indies soon, mainly Hollow Knight (when it comes out) and Golf Story. Can't wait for Donkey Kong Country: Tropical Freeze too.

There are already a tonne of games out catering to different people and I think support is only going to get better, so far it's the fastest selling console of all time.

Love it. Can’t play my XBox much anymore with a toddler around. Being able to take it into my room at night is a huge plus

Switch was easily my best purchase last year. Breath of the Wild, Mario Odyssey and Xenoblade 2 were all brilliant, and they are looking to have a strong line up over the next couple of years too. There is a reason this thing is breaking sales records all over the place.


Other games announced from the Nintendo Direct

Walt Flanigan said:
Love it. Can’t play my XBox much anymore with a toddler around. Being able to take it into my room at night is a huge plus
Click to expand...

I take it to work sometimes and play during my lunch break. Such a great console!

jargan83 said:
I take it to work sometimes and play during my lunch break. Such a great console!
Click to expand...

Dude. If I had one, I'd get very little done. I'm a sales person with a lot of autonomy. Provided I hit numbers they're cool.