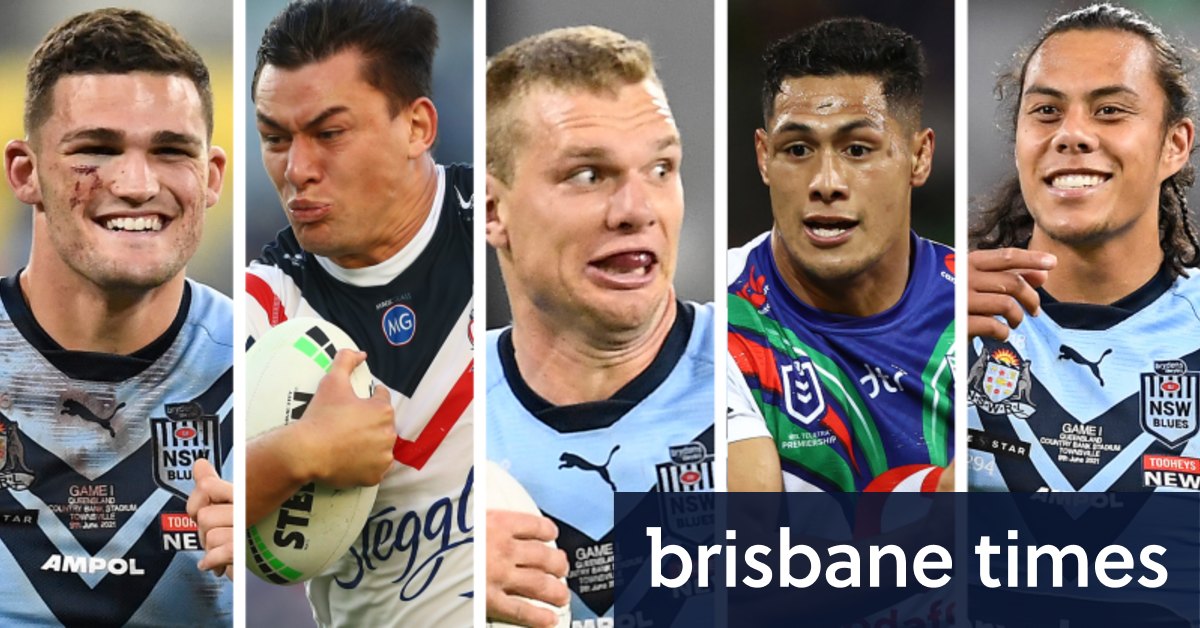 In a survey the Rugby League Players’ Association forbade their members from answering, the Herald polled 100 players from across the NRL to get their responses about a range of topics.

The prince of Penrith, Nathan Cleary, is now the king of the NRL after dethroning James Tedesco as the best player in the game.

In a survey the Rugby League Players’ Association forbade their members from answering, the Herald polled 100 players from across the NRL to get their responses about a range of topics.

In part one of the two-day reveal, the players anoint the game’s best in each position, the leading coach, the premier player, the best buy, who will win the competition, which team they would join if they had to leave their club and more.

Part two, to be released on Monday evening, will delve into the biggest talking points in the game, including the success of the rule changes, the performance of head office, whether Israel Folau should be welcomed back into the sport and whether players are disguising concussion symptoms to return to play.

The verdict: James Tedesco’s reign as the best player in the game lasted just one season. There was a changing of the guard last year when Tedesco took over top spot from Cameron Smith with almost half of the votes. But Penrith’s record-breaking run has catapulted Cleary into the No.1 position, with Tedesco dropping two spots to allow for the rise of Tom Trbojevic.

The surprise: Jason Taumalolo has featured in the top five each year since the Poll’s inception in 2018. He dropped out without a single vote in 2021.

The verdict: Craig Bellamy has returned to the top after a brief stint in Trent Robinson’s shadow. Back-to-back premierships saw the Roosters coach claim victory in this category last year, but Bellamy edged out Ivan Cleary to win his third coach of the year award in four years. Wayne Bennett also secured his fourth consecutive top three finish.
The surprise: Robinson only received seven per cent of the votes.

The verdict: There has been a changing of the guard when it comes to the No.1’s, with State of Origin I hero Trbojevic knocking off Tedesco as the game’s best fullback. Tedesco won this category the last two years, however Trbojevic’s blistering two months has seen him leapfrog the NSW and Australian No.1 to claim top spot. It was the fourth consecutive year Roger Tuivasa-Sheck finished in the top three.

The surprise: Latrell Mitchell missing out on a spot in the top five.


The verdict: Brian To’o’s dynamic start to 2021, picking up where he left off last year, hasn’t been lost on his peers. The Panthers winger received almost half the votes, comfortably accounting for his NSW wing partner Josh Addo-Carr. Despite votes opening after he suffered a season-ending injury, veteran winger Brett Morris still polled enough votes to finish in third.

The verdict: The Sydney Roosters’ Joseph Manu holds on to the best centre tag for the second year in a row, however his grip of top spot has loosened thanks to the emergence of Penrith young gun Stephen Crichton. Crichton rose from 4 per cent in 2020 to 21 per cent this year. Justin Olam hasn’t previously polled in the top five centres. He is one of the most underrated players in the game.

The surprise: How well Matt Burton polled after just a handful of games in the centres. Zac Lomax appears to have suffered from being out of sight, out of mind.

The verdict: Jarome Luai finished in fifth spot with just three per cent of votes last year. His meteoric rise saw him rewarded with his maiden NSW jersey in Origin I this year. Cameron Munster has never been voted the best No.6 in the game since the Player Poll’s inception in 2018. He finished second to Luke Keary the past two years and was beaten this year by a single vote.

The surprise: Despite limited football to start the year, Shaun Johnson’s feats of 2020 are still fresh in the minds of those who voted for the off-contract Kiwi playmaker, picking him ahead of Luke Keary and Cody Walker.

The verdict: No surprise to see Nathan Cleary voted the best halfback in the game. He finished second behind Mitchell Pearce last year, but there’s no denying his status as the game’s premier No.7. Hughes is regarded as one of the most improved players in the NRL after leading Melbourne to a premiership in 2020. It’s the first time Hughes has finished in the top five of voting. Reynolds missed out on the top five last year but knocked off the likes of Daly Cherry-Evans and Mitchell Moses to finish in the top three.

The verdict: There’s no denying James Fisher-Harris’ emergence as the best prop in the game. He has leapfrogged Warriors recruit Addin Fonua-Blake with half of the votes in 2021. He finished fifth last year with just nine per cent of votes. Brisbane’s Payne Haas secured his first top three finish in his young career.

The surprise: Canberra enforcer Josh Papalii dropped out of the top five.

The verdict: It’s only fitting that after three years of Cameron Smith dominance, his Melbourne Storm successor Harry Grant takes over as the best hooker in the game. Grant finished with 43 per cent of votes, well ahead of Australian hooker Damien Cook with just 12 per cent.

The surprise: Penrith hooker and Blues 18th man Api Koroisau finished well ahead of Damien Cook, who narrowly held on to his NSW No.9 jersey for game one.

The verdict: The Penrith dominance in the players’ team of the year continued in the backrow with Villiame Kikau winning the category for the second year in a row. Last year he received 28 per cent of votes, but that increased to 39 per cent this year. Gold coast marquee man David Fifita moved from third to second, increasing his votes from 10 per cent to 24 per cent in 12 months.

The surprise: Eels recruit Isaiah Papali’i has been sensational in 2021, but very few at the start of the year would have imagined he would keep Angus Crichton out of the top three backrowers. No room for Felise Kaufusi.

The verdict: Penrith No.13 Isaah Yeo has ended Jason Taumalolo’s three-year supremacy, knocking off the Cowboys captain to win the best lock in the game. It caps off an incredible 12 months, which has included a grand final and his State of Origin debut. Manly’s Jake Trbojevic finished in the top three for the fourth consecutive year.

The surprise: Jason Taumalolo’s standing in the game dropping so quickly. He received half the votes just last year. Also, no Cameron Murray in top five.

The verdict: In the battle of the whiz-kids, it was the Roosters’ Sam Walker who staved off a late fight from Reece Walsh to claim rookie of the year. The 18-year-old Walker has been sublime in his first season in the NRL, keeping the Roosters in touch with the top four despite a huge injury toll. When polling opened in round 10, Walsh had only played three NRL games and may have collected more votes if polling was later in the season.

The surprise: The large discrepancy in the voting between Walker and Walsh.

The verdict: It hasn’t taken Will Chambers long to come back to the NRL and reclaim the mantle as the biggest sledger/niggler in the game. Josh McGuire held on to the title for 12 months, but Chambers has won it back despite a mid-season return. Luai’s chirpy ways has seen him finish in second spot.

The surprise: Josh McGuire dropped from 30 per cent to eight per cent of votes. Playing in a losing side for most of the past 12 months might have toned down his verbal game.

The verdict: Hardly a surprise that Nathan Cleary is the favourite to win the game’s top individual honour. Ryan Papenhuyzen finished in second but has missed a few games since the poll opened to votes in Magic Round. Last year’s Dally M winner, Jack Wighton, didn’t poll in the top six last year when results were released with 11 rounds remaining.

The surprise: Tom Trbojevic would have likely polled higher had he played a few more games at that point.

The verdict: The best player, the best halfback, the Dally M favourite and now also the first player people would want to sign if they were starting up a new team. Unfortunately for the prospective Brisbane expansion bid, there’s almost no chance Cleary is leaving the foot of the mountains any time soon. The same goes for Manly’s Tom Trbojevic. The man who finished third, Tuivasa-Sheck, is bound for rugby next year. James Tedesco and Kalyn Ponga were the last two winners.

The surprise: Cameron Munster only receiving eight per cent of votes.

The verdict: At the start of the year many thought it would be a back-rower who would claim the best buy of the year honours, however most would have thought that would have been Titans recruit David Fifita. Isaiah Papali’i joined the Eels on a bargain deal and has been one of the best players in the competition, let alone best buys.

The surprise: Daine Laurie finishing equal second (16%) with David Fifita. He’s been a great pick-up for the Wests Tigers.

The verdict: The Melbourne Storm are about to go back-to-back, according to the players. However the same players also last year predicted the Sydney Roosters would claim a three-peat. While South Sydney received 10 per cent of votes, most think we’re heading for another Storm-Panthers grand final.

The surprise: The players aren’t really giving South Sydney much hope of winning the competition in 2021.

The verdict: After a one year break, the Storm are once again the team most others love to beat. The Broncos won this category last year but have slipped to third. The Parramatta Eels have finished second for the second consecutive year.

The surprise: The Panthers hardly rated a mention last year but racked up 12 per cent of votes in 2021 to finish fourth behind the Broncos.

Most love to beat

The verdict: The Melbourne Storm have taken over arch-rivals the Sydney Roosters as the most desired destination in the NRL. The Roosters have won this category the past two years, but the Storm dominated voting in 2021, potentially on the back of a premiership, to claim top spot. The top three spots have been taken by the same teams the past three years, just in different orders.

The surprise: The Broncos remain one of the destination clubs despite their woes for the past two years.

If you had to leave your club

Part 1 is a snooze. Hopefully part 2 will have juicier questions

Do they still ask most overrated player? Or is Mitchell Moses too sensitive?

The only thing I took from this is the word Forbade

ayatollah_murdoch said:
Do they still ask most overrated player? Or is Mitchell Moses too sensitive?
Click to expand...

Booooooo
You must log in or register to reply here.