By the way @Gronk good luck to KRudd and Turnbull. I hope they are successful because I happen to agree that the level of influence that Murdoch has isn’t healthy. Its just that I also happen to think both of them are hypocrites, particularly Rudd.

Rudd, the editor and beers with his ‘Tele boys’

It was like a scene out of a western when we arrived at the front doors of the Gaslight Inn, a trendy pub in the inner-Sydney suburb of Darlinghurst.

P.S. I am aware that Rudd said this article was bullshit so no need to post the tweet.

Is Erin Molan having a tilt at politics ? Why is Captain Smug in the background ?

I used to think no-one could ever match the levels of smug that Costello exuded.

ScoMo not only matches it, he dials it up to 11 on the smug-o-meter.

Gary Gutful said:
Barry from Bangalow isn’t real. I was exaggerating to make a point.
Click to expand...

Gary Gutful said:
Actually, the chances of a Barry living in Bangalow are fairly high….
Click to expand...

Barry is real FFS, he's the biggest bunch of Barrys under the sun.

Is there a particular time that I might find him?

Gary Gutful said:
Abracabarry is the name.
Click to expand...

Which reminds me of a contender for the dumbest lyrics known to mankind.

Abra abracadabra
I wanna reach out and grab ya

Gronk said:
Abra abracadabra
I wanna reach out and grab ya
Click to expand...

Gronk said:
Yes, because I’m involved a neighbourhood thing where we meet n have a bitch about stuff. Nah jokes, we get the heads up on developments, council and centennial parklands usually come and we all have a chat. Everyone is nice except for a certain…

… school, who seem to think that they can do what they f**king like. </rant>

I also vote in Sydney City Council and I see that Clover got in again.

I was driving through Coogee an hour ago and I see that Russell Fairfax ran as an independent.
Click to expand...

High tea is for women. Oh yeah.
Carry on

You just made Mr T sad.

Is Assange a journalist or a hacker ? I think both.

I think he has also been a victim of a “war crime”. You know, those charges that the good guys throw at the bad guys, whilst simultaneously committing the very same bullshit themselves ?

I do feel sorry for him that he dug himself a deeper hole by getting involved with the 2016 election thinking that the orange guy would pardon him.

I'm sick of hearing about the anemic little turd. He deserves everything he gets.

Alan Jones begins new live show with rant about being silenced, before being cut off

Direct to the People reaches out to the mythical silent majority on Covid, coal – and the 389 bus route


They’re trying to silence me! You can’t swim in the ocean! They changed the 389 Bondi bus timetable! Won’t somebody think of the property developers?

Alan Jones, having lost his low-rating spot on Sky News and his regular rant in Sydney’s Daily Telegraph, is back with a new show called Direct to the People.

Jones began at 8pm on Monday night, thundering about being silenced. “You’re not allowed to have an alternative viewpoint,” he bellowed on YouTube, Facebook and his own website, while spruiking his new morning podcast.

“They won’t silence you or me,” he continued.

Alas, he was silenced.

Jones’s online fans declared it a conspiracy of big tech. A post to his Facebook page said it was due to viewer demand. The YouTube ticker showed 1,778 people were tuning in.

The one-time 2GB shock jock was back two hours later, and delivered about an hour of fanciful and often fact-free ruminations.

On Covid: Only 2,000 people have died, there’s no proof lockdowns achieved anything, and you couldn’t swim in the ocean.

On education: It’s “full of indoctrination”.

On the Sydney ferries: There’s no air inside.

On property: Red tape is stifling progress and you need to “emancipate” people to build more homes.

Jones, freed of any obligations to civility or truth, said President Joe Biden “shouldn’t be allowed outside”, that Vice-President Kamala Harris was “unwanted by her own party”, and hinted that somehow 2016 nominee Hillary Clinton might end up in the top job.

The overarching theme was familiar. Jones is the man to give voice to the mythical silent majority. He sketched out an imagined Ye Olde Australia, a land where men are free and the 389 bus route cannot be changed without his permission.

He evoked nostalgia for this past where wealthy, high-profile Sydneysiders like him were free to say whatever they liked on the airwaves and be financially rewarded for it.

The New South Wales premier, Dominic Perrottet, joined the show. He displayed a remarkable nimbleness, and managed to keep Jones cheering for him while not actually agreeing with some of his more outlandish claims.

Jones and the Queensland senator Matt Canavan, that reliable outlier, egged each other on to new heights of adoration of coal and fear-mongering about renewables.

And then it was over, for now.

At last glance, Direct to the People had racked up 5,500 YouTube views. After that stuttering start, Jones chose not to end with the song he began with. 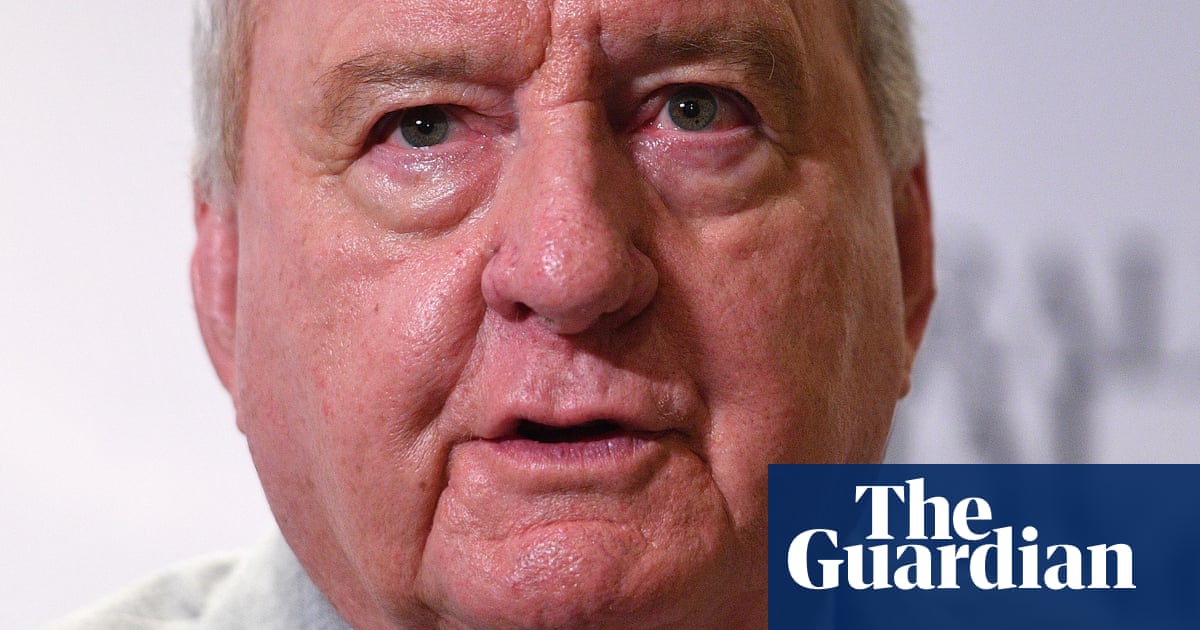 Alan Jones begins new live show with rant about being silenced, before being cut off

Direct to the People reaches out to the mythical silent majority on Covid, coal – and the 389 bus route

the universe has spoken, he should just give up