For those of you overseas.
Sky City Convention Centre has been on fire since 1PM Tuesday local time.
Major fire,


A massive SkyCity inferno continues to rage this morning, with ground-based firefighters using high-powered hoses to try to quell flames.

The neighbouring TVNZ building is being evacuated amid fears the fire may spread, and the Breakfast show is off air. Auckland Council's head office in Albert St is being assessed for smoke damage and health and safety for staff and could also be closed.

The fire - ignited by a worker's blowtorch on the roof of the seven-storey building about 1.15pm yesterday - shows little sign of abating this morning. Flames and thick smoke continue to pour from the building.

"It's now got to the point where the regional commander has told me that they've abandoned the roof, they think that the roof might collapse so what they might try to do is stop the fire reaching below level five," Mayor Phil Goff told RNZ last night.

He told Newstalk ZB's Kate Hawkesby this morning that the water and fire damage would be immense - with uncertainty now that the centre could be used for Apec in 2021. "It's been put back months, perhaps years."

More than 80 firefighters - 21 crews - are at the scene, with fire engines lined up Nelson St, as Auckland commuters face a morning of chaos and confusion. Many central city roads are closed, bus services are disrupted - and some businesses are urging workers to stay away today.

Firefighters face a battle on another front this morning, with a severe weather warning forecast for Auckland - including heavy showers, thunder, hail and gales gusting 100km/h set to strike.

Prime Minister Jacinda Ardern is also due to visit the site this morning.

Meanwhile, a spokesman for Fire and Emergency New Zealand told the Herald there had been little change overnight.

There were 21 crews on the scene who were still in a "defence mode", he said, and the were continuing to let the fire burn through the roof.

In a slight reprieve for motorists, two lanes had reopened on Nelson St but Hobson St and Wellesley St West were also closed.

"Motorists are being asked to pass the scene slowly and with caution," the spokesman said.


He warned the public about the toxic smoke in the area and advised them to keep their doors and windows closed with the aircon switched off.

Fire crews last night sacrificed the roof of the Convention Centre to try to save the $700 million building.

Thick toxic smoke has been billowing across the CBD from the moment the fire started.

The inferno - believed to have been started by a worker's blowtorch - burnt overnight.

Fire and Emergency Auckland Regional Manager Ron Devlin said the SkyCity fire was one of the "largest and most difficult structure fires in recent times".

"It is a complex fire. In the roof ... bitumen, straw and plywood is compact and so we are having real difficulty getting into it.

"The roof is not safe to go onto, and the floors below are quite a distance below, so actually fighting and putting out the roof fire is very difficult.

"The plan was to cool and protect the area from surrounding parts of the building, but let the roof itself burn.

"The fire is under control now, we are in a managed situation, we are just sacrificing the roof."

Firefighters have been diverted from as far afield as Hamilton to battle the blaze, believed to have been started by a worker's blowtorch on the roof of the new building. Sources say the fire ignited after the worker went on a smoko break about 1.15pm.

The peak wind gust at our climate station on the Sky Tower was 58.3 km/h from the west-southwest.

The peak wind gust at our climate station on the Sky Tower has been 62.3 km/h from the west.

The fire was "very difficult to extinguish" and was not yet under control. It started on the seventh floor and had since spread to the sixth floor. The fire has spread visibly across the rooftop in five hours, raising fears about the amount of damage.

The Auckland CBD was effectively sealed off for a large period yesterday with the closure of motorway on- and off-ramps. Officials warned people to stay away from the scene, amid fears of the toxicity of the smoke.

"It is a large fire, involving gas cylinders ... bitumen layers ... it is a very, very difficult fire to extinguish," he said.

"We are not on top of the fire, but with the resources just arrived we should be able to make progress."

Fire trucks had arrived from Hamilton. Woon said they had enough fire resources currently, but not if there was another major event.

Woon said the cause of the fire was not of concern at this stage.

But it is believed to have been started by a worker who went on a smoko break and left a blowtorch unattended.

Downtown Auckland is filled with billowing black smoke - which police warn could be toxic.


SkyCity casino and the Sky Tower have been evacuated and are closed until further notice. SkyCity hopes to be able to reopen its hotels and restaurants by lunchtime on Wednesday.

Parts of Nelson Street and Wellesley Street are closed while firefighters battle the blaze, and traffic around SkyCity was gridlocked for large parts of Tuesday. NZ Transport Agency is urging motorists to avoid the area. 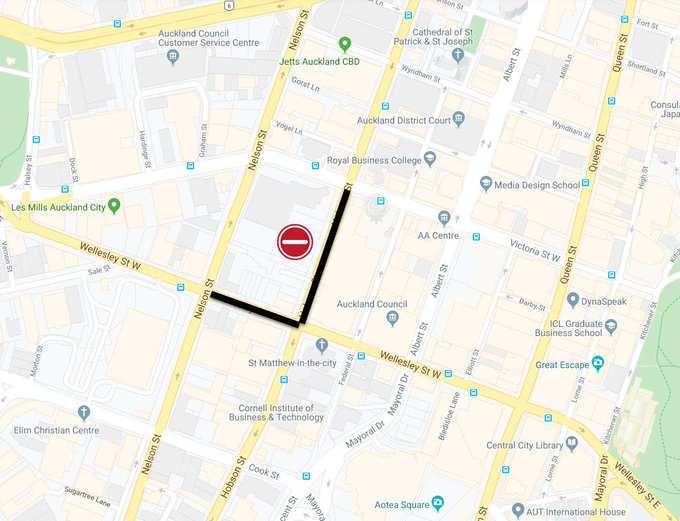 Auckland office block air-conditioning units are being shut down to stop them dragging fumes and smokes into nearby commercial towers.

Account manager Charli Farman was sitting at her desk when she noticed smoke and told a colleague "I think it's on fire".

"It was a really small amount of thick black smoke."

"Then all of a sudden it was flames and really dark smoke."

Farman said a man in an orange construction vest was standing at the top of the building when the fire started.

"He was standing at the back for about four minutes but then he just ran when the flames started to spread".

Construction worker Sandeep Patel said he was inside the building that is now on fire and had been evacuated.

"We have no idea what is going on, all of a sudden we were told to get out."

Auckland Mayor Phil Goff is reporting what he can see live on his official Twitter page.

"Fire is really building. People can be seen on the roof,'' he wrote.

Yeah its pretty bad, I dare say insurance will cover it but it draws out the congestion and delays the opening of it for quite some time.

Good to read Jacinda will be on site this morning, a good working group should be able to come up with ideas to get it under control

Would hate to be the welder responsible.

A mate of mine who is prone to exaggeration was on FB today saying “could be the most expensive disaster in the country’s history!” Yeah mate if you ever took your Jaffa blinkers off and looked past the Bombay Hills you might’ve noticed that earthquake in Christchurch they’re still rebuilding from nearly a decade later....

SpaceMonkey said:
A mate of mine who is prone to exaggeration was on FB today saying “could be the most expensive disaster in the country’s history!” Yeah mate if you ever took your Jaffa blinkers off and looked past the Bombay Hills you might’ve noticed that earthquake in Christchurch they’re still rebuilding from nearly a decade later....
Click to expand...

It's just wasteland beyond Bombay, isn't it?

Didn't they have an earthquake in Napier a while ago too?

Most expensive disaster ? How much money has been spent on the Warriors in 25 years ?

Beavers Headgear said:
Most expensive disaster ? How much money has been spent on the Warriors in 25 years ?
Click to expand...

Rich102 said:
Didn't they have an earthquake in Napier a while ago too?
Click to expand...

just a little while...

JJ said:
It's just wasteland beyond Bombay, isn't it?
Click to expand...

A charred, smoking wasteland to the north...

SpaceMonkey said:
A charred, smoking wasteland to the north...
Click to expand...

SpaceMonkey said:
A charred, smoking wasteland to the north...
Click to expand...

No we got the Brynderwans blocking Auckland..

ozbash said:
No we got the Brynderwans blocking Auckland..
Click to expand...

Well, it’s to the south for you fine folk up north