SP PNG Hunters have brought back their leadership core, a powerful group of second-year players...

Just some specific on the players selected;

After 8 or 9 seasons it’s about time that the hunters started to deliver NRL standard and quality players.

Also the NRL clubs need to give these raw talents more of a chance.

mikail-eagle said:
Just some specific on the players selected;

cumbrian Mackem said:
Any new players to keep a lookout for in 2022 ME?

Yeah Matthew will definitely give good competition to Terry Wapi for the Fullbacks spot.
Mark Tony from the Lae Tigers is another player that I'm keen to see in the ISC
.

And this is Francis Kembis on the left.
Young lad from the Waghi Tumbe. He adds some much need size to the Team.

DIGICEL Cup premiers Lae Tigers have contributed half of the 12 new faces in the SP Hunters train-on squad announced on Friday. Runners-up Waghi Tumbe and Rabaul Gurias have supplied two players each.

Out of the 12 Digicel Cup teams, only the Tigers, Tumbe, Gurias, Hela Wigmen and Kimbe Cutters contributed at least one player to the 2017 Queensland Intrust Super Cup champions.
“The players we chose were picked for their suitability and how we wanted to play our game.
“There is no favouritism; I’ve got no allegiance to any club.
“I chose purely on how they will suit the Hunters. The new faces are Jesse Matthew, Francis Kembis (Tumbe), Nathan Tente, Liam Joseph (Gurias), Roderick Tai, Mark Tony, Jamie Mavoko, Casey Dickson, Kitron Laka, Sherwin Tanabi (Tigers), Valentine Culligan (Wigmen), Tony Worrot (Cutters).

Church said a final 26-man squad would be announced in February before they relocated again to Runaway Bay on the Gold Coast.Meanwhile, he said premiership-winning Hunters trio Ase Boas, Enock Maki and Stanton Albert will not be part of the 2022 squad for varying reasons.

Church said playmaker Boas would not be fit for the South Pacific Brewery-sponsored team’s ninth Cup season as the veteran, who would turn 33 on Boxing Day, had been battling a niggling injury in recent years.
He said 31-year-old Maki had called time on his colourful rugby league career in which the Papua New Guinea Kumuls prop scored five tries across 99 Cup appearances since 2015.
“I want to make it clear that the trio were not dropped,” Church said.
“I had a discussion with Maki about his body and he chose to retire.“After I talking to him, that was what he wanted and he handled that quite gracefully.
“Boas probably wouldn’t meet medical qualifications and it was his own choice. Albert has some personal issues. “We understand that his dad is unwell and they are trying to get him to surgery and he has other things to focus on.
“He was offered to return, but he chose not to and we respect that.”

COACH Matthew Church says he is excited to enlist Kimbe Cutters prop Tony Worot for pre-season training with his SP Hunters despite the absence of experienced Papua New Guinea forwards.
The only Cutter selected for Church’s 32-man train-on squad, the East New Briton – with his height and weight – is expected to come into calculations for the final squad alongside experienced campaigner Epel Kapinias.
Church told The National last Friday that he was backing Worot to fill the void created by Kumuls pair Enock Maki and Stanton Albert, who both would not be part of their 2022 Queensland Intrust Super Cup campaign.
“I am excited to work with Tony,” he said of the 26-year-old.
“Anthony is rangy and lean. We don’t have a lot of those around in PNG, so to get someone like him, it gives balance to the team.
“He is such a young guy who really impressed me in his first week of pre-season training.

Tony Worot walking off the field after the Kimbe Cutters’ Digicel Cup match against fellow New Guinea Islanders Rabaul Gurias at the National Football Stadium in Port Moresby last season. – Nationalpic by MICHAEL PHILIP
“He has a great running style. We can credit that to his long legs.
“He has been really good to start the pre-season.
“We’re excited to build on what he knows and what he can learn in a bid to make him the player that we want him to be.” The made coach Matthew Church’s initial 32-man squad in the pre-season and is now one selection away from making the final 26 for the 2022 Intrust Super Cup Season.
Worot played for Digicel Cup heavyweights Lae Tigers in 2015 and 2016 before the Nangananga villager returned home the following year to join Rabaul Gurias.
The 186cm, 102kg forward switched to the Cutters when the Kimbe side joined the country’s premier rugby league competition in 2019.
“I’m excited to be here as I’ve always dreamed of playing for the Hunters,” Worot said.
“I’m looking forward to the pre-season grind.

Cutters forward Tony Worot taking on the Gurias defence. – Nationalfilepics
“I have to work hard and continue improving to get good results at training.
“Hopefully, I make the final 26-man squad, but I’m not looking too far ahead.”
The South Pacific Brewery-sponsored Hunters are into their second week of pre-season training and Church – alongside assistant coaches Paul Aiton and Stanley Tepend – is keeping an eye on every player.
Meanwhile, Cutters coach Luke Samak congratulated Worot on his selection.
“We are thrilled that one of our players has joined the Hunters for pre-season training,” he said.
“We wish him all the best in his bid to make the final squad.” 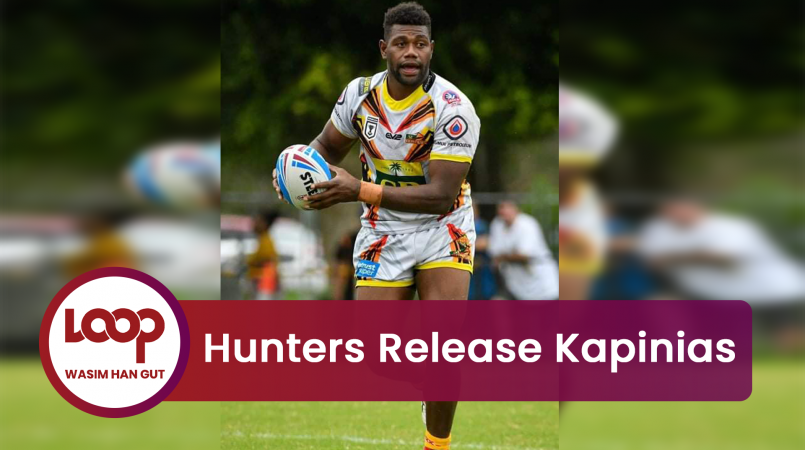 The SP PNG Hunters have announced the release of promising young talented prop forward, Epel Kapinias due to ill-discipline.

cumbrian Mackem said:
What a moron

The SP PNG Hunters have announced the release of promising young talented prop forward, Epel Kapinias due to ill-discipline.

A few weeks before Christmas the highly talented Edwin Ipape was also released for the same reasons.

mikail-eagle said:
A few weeks before Christmas the highly talented Edwin Ipape was also released for the same reasons.

It says in the article that a NRL club was interested in kapinias last season but pulled out because of his ill discipline.

Kapinias accepts decision
January 13, 2022The NationalSports
By MICHAEL PHILIP
PROMISING rugby league forward Epel Kapinias has accepted his sacking from the SP PNG Hunters but is unsure what he did wrong.
The club released a statement earlier this week announcing the 23-year-old’s termination but did not give much detail other than to say that Kapinias had been sacked for “breaking team rules during the first half of pre-season training.”
The statement added that Kapinias had not “lived up to the values and standards set and expected by the Hunters organisation.”
Kapinias declined to comment on the details of his sacking but said he accepted the decision of the Hunters management and would return to his club Rabaul Gurias in the Digicel Cup and continue to improve as a player.
“I can’t say anything back to the Hunters management but I accept their decision,” he said.
“The rules, values and standards set by the Hunters management, yes it’s there but where did I go wrong? I still don’t know? But, as I’ve said I am here willing to give back to my provincial team the Gurias for this season.”
He said he was still waiting for further clarification from the club on the rules he breached and values and standards he did not live up to.
Hunters coach Matthew Church said he could not vouch for players who did not value the opportunity presented to them at the Hunters.
“There is no bigger fan of Epel than me so I felt this could have been a huge year for him in regards to NRL and the World Cup,” Church said.
Papua New Guinea Kumuls coach Michael Marum when asked if the Hunters code of conduct, rules and expectations put on players was fair and reasonable, said he could not comment on what the club’s management had in place.
“It is indeed very disappointing news for me to hear that young Epel was released by the Hunters following what specific reasons, we still don’t know, but I hope he learns from it and makes a move on in this year Digicel Cup season with the Gurias and hopefully he can make a come-back and fight his way up again,” Marum, who coached the Hunters from 2014 to 2019 and won a premiership in 2017, said.
He said if Kapinias performed at the Digicel Cup level with the Gurias he would consider him for selection into the Kumuls squad for this year’s World Cup in England.

cumbrian Mackem said:
It says in the article that a NRL club was interested in kapinias last season but pulled out because of his ill discipline.

Edwin Ipape has now signed for Leigh Centurions in the English Championship.

Edwin Ipape has now signed for Leigh Centurions in the English Championship.
Click to expand...

Hopefully Adrian lam will sign a few more kumuls for this coming season.

maybe even sign kapinias as well and others who are cut from the hunters training squad.
You must log in or register to reply here.