Right, time to switch our focus to the next task at hand and that's an absolute blockbuster on Saturday night, at home, against the Storm. A huge match up for us as not only should it be a great game, but it will really show us where we're at in terms of Premiership contention. I know that Melbourne have been struggling as of late, but I still see them as a top four team. I think they'll come right so it's a massive test this week that is going to take one hell of an effort to win. What's more, we all know our record against these purple pricks is so, so poor. We rarely beat them, and it's been that way for over 25 years now. In fact, I think our record against the Storm is worse than any other club. I don't know what it is but there's no doubt that history is there, and we have to try to ignore that on Saturday night. Thank God this is at Accor and not in Melbourne.

So, the big question for me this week is have we got Melbourne at the right time? I'm not quite sure of the answer to that question. They've lost three in a row now for the first time since 2015 so on the one hand, we could get them low on confidence. However, on the other hand, them losing three in a row could actually be very dangerous as they'll be so fired up and desperate to get their Season back on track. We need to be wary of that. A desperate Storm is a dangerous Storm. What's more, despite the injuries they have currently, their side is just packed full of talent with guys that have burned us so many times before in the past. Olam, Munster, Hughes, Grant, NAS, the Bromwich brothers; The list just goes on and on despite their injuries. I think holding our own in the middle and then doing our best to shut down Munster and Hughes is the key to winning this one.

For us, it's about continuing to build and continuing our run. This is definitely going to be the toughest challenge we've had in a number of weeks but it's one I'm sure the boys are really looking forward to. I certainly am!! We need to put the past record against the Storm behind us and focus on getting the result. Past results don't matter, we gotta live in the here and now. A lot, and I mean a lot, has to go right for you to beat the Storm usually and I expect that to be no different this weekend so we will have to put in one hell of a performance if we want to contend. A good completion rate is a must, that's probably the biggest thing. You can't constantly give the Storm opportunities while continually missing yours. So, we must get that right. Defence, particularly down that right edge, must improve hugely too as I'm sure they'll target us there. Thankfully, Cookie and Cam are back which will see us pretty close to full strength and it will help massively!

Really looking forward to the challenge this week! I'm up for it and let's hope the lads are too! Sick and tired of Melbourne constantly having the wood over us so let's get one over them for once in this one! Bring on Saturday!

Here's my predicted line up for Round 19 against the Storm,

That's how I see it shaking out. If we can do that it will be our strongest line up of the year minus Host and Graham.
Last edited: Jul 19, 2022

Sele is injured, and you left out Havili. He has been one of our form players. Surely you got those 2 mixed up?
E

Hellray said:
Sele is injured, and you left out Havili. He has been one of our form players. Surely you got those 2 mixed up?
Click to expand...

Jeez I'm an idiot! Of course I knew that hahaha.

Obviously typed without thinking lol. Have edited to correct it.

Rabbitohs Line Up For Round 19 Against Storm: https://www.rabbitohs.com.au/news/2...-for-junior-appreciation-round-against-storm/

Very happy with the team named this week!! Pretty much as predicted and it's the strongest squad we could possibly name minus Graham, Host and Sele. With respect to Milne, it's good to see him not in the centers, we really need to sure that right edge up on defence and hopefully Jed helps with that.

How good to have Cookie and Cam back too?!!

So a strong side and it needs to be against the Storm. Saturday night can't come soon enough!
S

At present we are above Melbourne. Melbourne have conceeded 30+ several times, when did that last happen?
The squad should hold absolutely no fears for Melbourne.
In Sydney, this is a very winnable contest.
Are you people confident in Jed C? Is his defense strong enough out wide? He has been playing strongly and is match fit after recent gallops, but can he handle centre?


Steenson123 said:
At present we are above Melbourne. Melbourne have conceeded 30+ several times, when did that last happen?
The squad should hold absolutely no fears for Melbourne.
In Sydney, this is a very winnable contest.
Are you people confident in Jed C? Is his defense strong enough out wide? He has been playing strongly and is match fit after recent gallops, but can he handle centre?
Click to expand...

I wouldn't say confident just yet. I'm hopeful. He is a good defender and came through the juniors as a center I think. Is surely better than Taane.

However, I still have nightmares of his defensive effort at right center against the Storm in this game last year so I guess that's what worries me.

But I guess we have to back him! He can do it!

As i predicted, taane is playing in the back row in nsw cup,i think he is more suited there, he is a big body and had a good game playing lock in the internationals.
Now we need a couple of backs

From Fox Sports, jeez our record against the Storm really is ridiculous,

Hoodoos come and hoodoos go in modern rugby league but one that has stood the test of time is the Storm against the Rabbitohs.

Souths have scored single figures in over 40 per cent of their matches, while Storm have cracked the 25-point barrier in almost half of their games.

Souths went very close last start, going down 15-14 in golden point in Round 2, their seventh straight loss against Storm, but this time around they are getting them at either the very best or the very worst time — Storm’s current three-game losing streak is their worst since losing four straight in 2015 but their last two three-game or worse losing streaks have ended with a 40 point win. 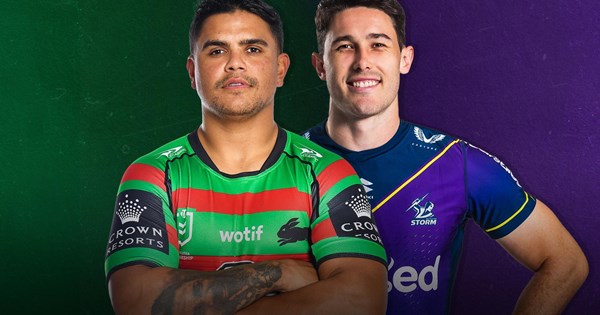 JD staunchly saying that he's 'over it' in regards to our record against the Storm, that he's 'over us giving them two points every time we play' and that we will do 'whatever it takes' to win has really fired me up!!!