Having watched the replay I think that’s our best performance of the year it was clinical. Most pleasing thing for me was our scramble in defence and working so hard for one another. We need to keep building on that in coming weeks showing sheer desperation when defending our try line.

Trell was everywhere and he had some tough strong charging carries making plenty of metres coming out of trouble too he was just so busy they had no answers on how to stop him. I also loved his support play sniffing in the middle of the field he was very busy.

AJ well another strong game all round and he keeps adding to that try tally.

Paulo: I have given him some criticism over time which he deserved but last couple of weeks he’s really stepped up doing his job well. He will move to wing now next week with Campbell back.

Tass we should call him a master at the shit work because that’s what he’s doing most weeks now taking so many tough carries coming out of trouble. He looks good in space too, was a good pass for the AJ try. He’s still gotta work on when to put his man away a bit better though but that will come in time. We need to hold onto this kid. Had a good trysaver on Penisini as well.

Thompson well he’s been rewarded the last 2 weeks for such a strong year in NSW Cup and he hasn’t let us down. He still needs some work on his fitness, discipline and limiting errors too, he will drop out back to on standby next week. He has earnt a contract next year I think.

Cody well he needed a big game and boy didn’t he deliver. He was so hungry and in everything sniffing around and was rewarded with 2 tries. He had his hands on the ball so much too looking too create. His kicking game was good too.

Hawkins well he did just what we needed tackled well and his kicking game was good and that’s all we could ask for. Had some good passes as well.

Tatola well he’s in career best form. He’s been brilliant another brilliant game 17 runs for 198 metres Parra could not stop him he was a man on a mission.

Cook: 11 runs for 103 metres was very busy probing for any chance to run, had some offloads too and a lovely try assist for Cody. He was great in defence too. His service also very good. A top game from Damien.

Sele: Was good to have him back loved the energy he brought and post contact metres. 123 metres in 30mins welcome back Hame and geez I hope you can stay injury free.

Keaon: Was a busy game from Keaon made around 160 metres again. A lovely try assist for Thompson as well. Keaon was overall good in defence despite a couple of lapses in the second half.

Arrow the unsung hero what a performance 16 runs for 192 metres he was very good and offloading too and in defence strong wouldn’t let anything past him.

Murray what can you say simply outstanding best on ground for me. 22 runs for 190 metres he made some tackle busts, 4 offloads, 2 line break assists and 43 tackles. His balls to put Trell away were brilliant. Another top game from Cam Captain inspirational.

Nicholls very good 9 runs for 114 metres and busy in defence. Only mistake was that knock on he made.

Havili two very good stints and such strength in his carries. Had some nice offloads too and was strong in defence.

Moale only had limited minutes but did his job.


So yeah overall I’m ecstatic cant wipe the smile off my face today!

We are building nicely. I still feel we can be a bit better by not giving cheap penalties away and we can improve a bit more in attack I feel. Also limiting the oppositions offloads is a work on.

So if you haven’t yet watch the replay again enjoy and start firing up for an absolute blockbuster next Thursday Night back on home turf against a team we can’t stand in Penrith yes they’re understrength currently but they still have many quality players. So let’s enjoy the build up and pack the stands in red and green next Thursday Night! We are a coming I can feel it in my bones and red and green veins!

Why so quiet in here? This place should be buzzing after last night! 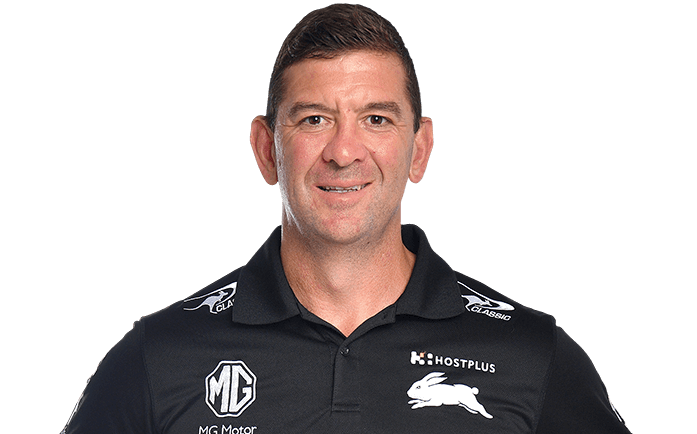 South Sydney coach Jason Demetriou has paid tribute to North Queensland premiership-winning coach Paul Green, after his tragic death earlier this week. Demetriou was an Assistant Coach alongside Green when the Cowboys broke their premiership drought in 2015 in one of the greatest Grand Finals in...