I have two words for him.
Ryan Matterson.

What adversity the club needs to overcome
Click to expand...

It makes me so happy to know that Rhino's butt is still hurting after being humped so solidly. It makes all the bad years of being a Panthers supporter just So Sweeeet! Thanks Rhino!

Junior rep trials against the bulldogs starting at 9-30 tomorrow morning at Windsor.

Feel free to call out Rhyno for the loser he is, but he gets off on his huge reaction score. Maybe just don't quote the gimp.
P

To'o re-signs until end of 2027 is the news from Panthers this arvo.

Blues Riff said:
Feel free to call out Rhyno for the loser he is, but he gets off on his huge reaction score. Maybe just don't quote the gimp.
Click to expand...

Panther_Platz said:
To'o re-signs until end of 2027 is the news from Panthers this arvo.
Click to expand...

Penrith Panthers is thrilled to announce the re-signing of international winger Brian To’o.


The contract extension will see the two-time premiership player remain in Panthers colours until at least the end of the 2027 season.


“I’m very grateful and blessed to call Panthers home for the next four years,” To’o said.

“I’d like to thank everyone at the club for giving me the opportunity to do what I love. I can’t wait to play for our amazing members and fans, who have shown me nothing but love and support.”


A St Marys junior, To’o progressed through the development pathways at Panthers and was a member of the club’s SG Ball side that won the premiership and national championship in 2016.


He advanced to the club’s under-20s and NSW Cup sides before making his NRL debut for the Panthers in 2019.


The 24-year-old, who has played 70 NRL matches, has developed into a representative player, having played six State of Origin games for New South Wales and seven Tests for Samoa.


Panthers coach Ivan Cleary couldn’t be happier to have Brian re-sign with the club.


“Not only is Bizza a tremendous player who has continually performed at the highest level in the biggest games, but he is more importantly a brilliant young man who brightens the day of anyone he comes in contact with,” Cleary said.


"I feel happy for our players, staff, members and partners that he will be here long-term."
Panthers Rugby League CEO Matt Cameron echoed Ivan’s comments.


“As a local junior, Brian epitomises what it means to be Panthers player and it is clear that he is passionate about representing the community. 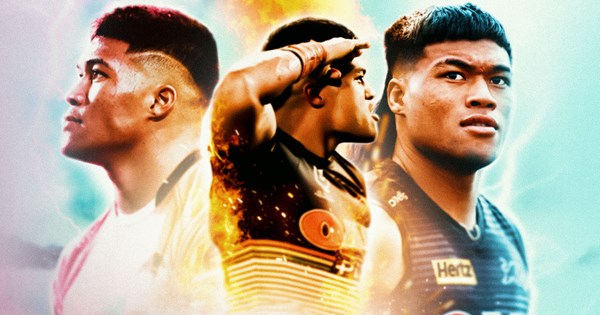 “I’m very grateful and blessed to call Panthers home for the next four years,” To’o said.

BossleyPanther said:
Honestly guys I find it weird all the boys were not at his wedding. If it was me I'd be pissed.
Click to expand...

OK I've had a look at the wedding and reception footage. Off the top of my head ,I saw-
Nathan Cleary
Dylan Churchill
Tiny May
Yeoy
Eiso
Soni Luke
Liam Martin
Mitch Kenny
I Tago
Kurt Falls
Moses Leota
Also spotted ex- Panthers-
Christian Crichton
Tyrone May
Api
MWZ
Not to mention, as part of the actual wedding party-
Romey
Critta
Spencer
Turuva
,but yeah, I didn't see Fish, so unless he has a good excuse, I'd be pissed.
Also in attendance were Ivan and Bec Cleary seated with Cam Ciraldo. Now there's a story for you-
"Bulldogs coach has dinner with entire Panthers First grade squad"
That ought to get the gronks over at the Kennel moist.
Last edited: Dec 10, 2022

Iamback said:
Bryce
Idris
Hiku - Lasted what a season?
Lets not forget that train wreck of a CEO

Contracts aren't his strength but as Smug said the positives outweigh the negatives.
Click to expand...

Occassionally Buzz writes a decent article. (Yep we all know that Gus lives within his head space). In this article Buzz highlights the constant tinkering that Gus does with players.

It must be frustrating for other admin staffs never mind the players. A level of unrest when Gus falls in love with his new player, or falls out of love with a player.

Makes me wonder was Gus continually sticking his beak into Ivan's coaching in the same way pre 2015 ?

Any chance of a cut and paste? It's behind a paywall.

If you like Gould or hate Gould does not matter ..Its hard to take any article by buzz about Gould.His dislike for him goes way before Gould time with us.Clubs move players on its still happening now and more may go depending on what the new cap is and how it’s structured
G

soc123_au said:
Any chance of a cut and paste? It's behind a paywall.
Click to expand...

Phil Gould has not won a premiership since he was coaching director when Ricky Stuart led the Sydney Roosters to the 2002 title.
But he sure has broken records for player and coach sackings over the past decade at Penrith Panthers and now the Canterbury Bulldogs, costing the two clubs upwards of $6 million.

It has been a highly expensive exercise because almost every discarded player and coach – in a 28-strong list – has received significant payouts or contributions to their salaries at their new footy clubs.

Even Corey Allan, who was dispatched from Belmore to Bondi this week, was on $500,000 and will cost the Bulldogs around $300,000 in their cap next year before the Roosters pick up the rest of his salary.


On Thursday it was the same almost cut-and-paste statement with a different name: “We thank Corey for his two years of service to the Bulldogs and wish him all the best for the future.”

They say Allan won’t be the last Bulldog to be shown the door.

It is common knowledge in rugby league circles that Great Britain forward Luke Thompson and halfback Kyle Flanagan had been offered the chance to look elsewhere.

All this can create an unsettled environment inside footy clubs. No player is safe while Gus is in charge. Not even marquee players.

It would no doubt give new coach Cameron Ciraldo a top-four spine and roster. But there will be carnage along the way. More players will need to be offloaded.
Gus has never been afraid to get rid of big names.
He cut the champion edge forward Luke Lewis in 2012 from Penrith in the prime of his career. Lewis not only won the 2016 premiership at the Sharks but also the Clive Churchill Medal.
The likes of Matt Moylan, Jamie Soward, Trent Merrin and James Maloney were on marquee-player money at the Panthers before being ushered out early.

As one player manager, who declined to be named, said last week: “Gus is always looking to strengthen his roster even when he doesn’t have the cap space to allow it.

“He’ll just move someone on. He’ll just tells them it’s in the best interests of all parties. And they leave.”

Gus’s ideas on roster management differ to others.

For example, Penrith had to dismantle the squad Gould had assembled – offloading Waqa Blake, Reagan Campbell-Gillard and Dallin Watene-Zelezniak – for Ivan Cleary to build the roster to win two straight titles.

Penrith changed its entire recruitment strategy when Gould left. They brought Cleary back against Gould’s wishes as head coach.

The Bulldogs are now experiencing exactly what happened at the Panthers.

Call it another five-year plan or whatever. It’s just the way Gus does his business.

Anything and any amount of money to win his first title in 20 years.

The Allan one makes no sense. Paying $300k + whatever his replacement is when he is off contract at the end of the year

Anyone know the results of the Junior trials against the Bulldogs at Windsor yesterday ?
G

Hairy Hamburger said:
Anyone know the results of the Junior trials against the Bulldogs at Windsor yesterday ?
Click to expand...