BLM01 said:
Another secret... they may be blocking cause they have a contract and we would be in more cap dilemma By telling him to play elsewhere where we contribute most of their salary or
just simply play them in reserve grade
and
where we gonna find money if we follow your idea to buy to fill so many 1st grade gaps without buying all reserves

And what value for money 1st grade player have we as you say “passed on” since Hook has been announced?..cant think of any...

JAC...not on fullback money thank you when never played there at NRL... and is a great winger and should be playing there and paid accordingly
Welsh..signed for decent coin and stayed with his current club and coach..no surprise there
AFB...good prop but overrated to money paid by the Warriors and likely end up in tears
Click to expand...

For the players we want to get rid of, ' You are not in our plans for season 2022 and will most probably not play in our first grade side in 2021 unless your form improves dramatically'.

The player managers will begin to find them a new home.

possm said:
For the players we want to get rid of, ' You are not in our plans for season 2022 and will most probably not play in our first grade side in 2021 unless your form improves dramatically'.

The player managers will begin to find them a new home.

ONLY POSITIVE MCGREGOR AND YOUNG GONE
Click to expand...

BLM01 said:
You’re funny
who’s gonna want our player discards
it’s still gonna cost us most of their salary to offload them and it won’t even be to another NRL club
we are already near the bottom of the ladder
Then we don’t have enough money to buy players to fill the holes
Click to expand...

Are you Millward?
B

End of year reviews | Lomax goes bang
If you were wondering why St George Illawarra centre Zac Lomax was picked in New South Wales' squad, look no further than this classy effort back in Round 11.

End of year reviews | A wet and wild farewell
An emotional Round 14 victory over the Parramatta Eels was Paul McGregor's last hurrah as coach while winger Mikaele Ravalawa had a breakout game against countryman Maika Sivo.

getsmarty said:
End of year reviews | A wet and wild farewell
An emotional Round 14 victory over the Parramatta Eels was Paul McGregor's last hurrah as coach while winger Mikaele Ravalawa had a breakout game against countryman Maika Sivo.

Yep..it was all about emotions for Mary that is for sure.
And some of the Hi-5s were not for the win but a celebration of some sorts..especially in my household.
So....the players decided to put in for his last game.
What about the previous 1.5 years and the 6 games after..where we scraped in for 1 win against the spooners
when I thought it was all about pride in the jersey, club, sponsors and supporters

That just shows...take emotions away about farewelling a mate which was really what that game was about for most. nothing more, No message to hint that this was a wrong decision etc..and to confirm
look what we have produced in the past 9 years reflecting how we have been coached, trained and administered for some time as a rugby league side.

And Mary left leaving no doubt in anyones mind or who cared to listen that he has been hard done by...fed dinkum.

End of season reviews | Cody Ramsey makes a splash
St George Illawarra upstart Cody Ramsey made a name for himself at the Perth Nines and continued his upward trajectory come Round 18 when he scored two tries on debut.

Players on excitement of '21 season (Part one)
The Dragons' playing squad have earmarked what excites them most about the upcoming 2021 campaign.

getsmarty said:
Players on excitement of '21 season (Part one)
The Dragons' playing squad have earmarked what excites them most about the upcoming 2021 campaign.

2 points from this video:

1. 'Playing squad' - interesting choice of words there and could be misconstrued. Maybe top 30 squad or something would have been more appropriate given who they interviewed in part 1 ie: Tariq, Cam, Fui, Zac, Clune, Ford and Kerr.

2. Change - it was the overriding message from everyone, but in particular Tariq. It feels like a few boys had "had enough" of the previous regime and were playing accordingly. It will be fascinating to see what transpires over the next couple of weeks or months.
G

St George Illawarra gave glimpses of their ability and an exciting brand of attack in 2020, but ultimately another subpar season cost Paul McGregor his job as head coach.

Four losses to begin the year had some believing McGregor would leave the club a lot earlier than he eventually did after 14 rounds.

For a brief time it seemed like the Dragons, powered by much-improved fullback Matt Dufty and centre Zac Lomax, were a chance to complete a stunning turnaround and reach the finals.


However, three wins from their last seven matches was only good enough for a 12th-placed finish, six points adrift of Cronulla in eighth. St George Illawarra crucially lost five matches by six points or less.

A lack of continuity perhaps hurt the Dragons, with Ben Hunt changing between halfback and hooker and captain Cameron McInnes filling a hybrid lock/dummy-half role as the year wore on.

Anthony Griffin will take over as coach in 2021 after ex-assistant Dean Young, who is Cowboys bound, finished the season at the helm.

Home and Away record The Dragons' first win came at their makeshift "home" of Campbelltown Stadium against Cronulla in round four amid COVID restrictions on venues.

They followed it up with a victory on the road over the Titans at Suncorp Stadium. Arguably St George Illawarra's best performance was at Kogarah's Netstrata Jubilee Oval when they belted Manly 34-4 in round nine.

The team only won from one from four games at WIN Stadium in Wollongong compared to two from six at Kogarah (one loss came as the visiting team against Cronulla). The Dragons didn't have much trouble advancing the football, ranking sixth for metres gained with 1756 per game – beating premiers Melbourne (1702m) and preliminary finalists Canberra (1661m).

However, St George Illawarra's good work in possession was negated by their defensive output. They conceded the equal-second most metres alongside the 15th-placed Bulldogs (1847m per game). Only the wooden spoon-winning Broncos were worse (1862m). The 20 minutes before half-time was when the Dragons were most dangerous, scoring 32 of their 63 tries (36.1 percent) between the 21st and 40th minute. The Dragons were relatively slow starters, conceding 24 tries (30.4 percent) inside the opening 20 minutes (they scored 12 in that period) while leaking another 11 (13.9 percent) from the 21st to 30th minute.

St George Illawarra were typically solid either side of the break, conceding only 14 tries in the 31-40 and 40-51-minute periods. Newcastle-bound second-rower Tyson Frizell was the team's most prolific offloader. The Blues and Kangaroos star offloaded 19 times and his teammates made 166.8m from those passes. Lomax exclusively handled St George Illawarra's kicking off the tee, taking over from departed captain Gareth Widdop, and the 21-year-old did a fine job with 63 goals from 80 attempts (78.8 percent).

The Dragons had the fifth-highest success rate, just a shade behind Penrith (79 percent). The Rabbitohs, with top point-scorer Adam Reynolds as their kicker, had the best rate of 84.6 percent. 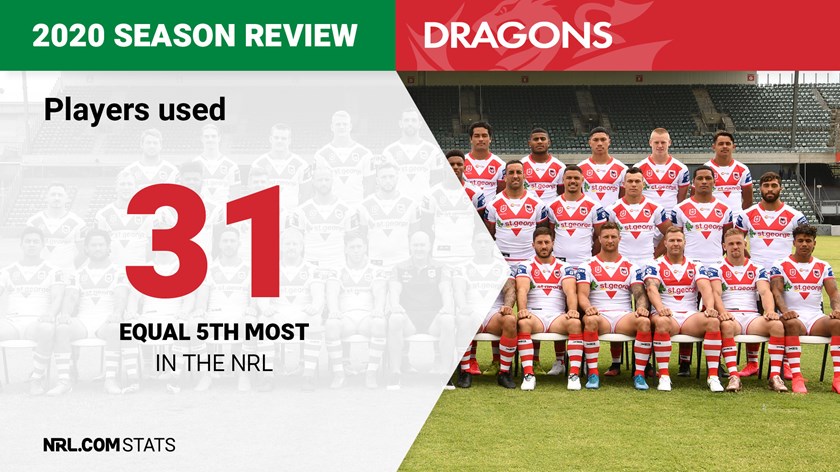 The Dragons were among a swathe of teams to use 31 players in 2020, one behind the top total of 32 shared by the Broncos and Raiders.

Five men made their NRL debuts – Adam Clune, Cody Ramsey, Max Feagai, Jayden Sullivan and Eddie Blacker. Clune was the only one to play regular first-grade at halfback though, with the others not given a chance until the later rounds. Billy Brittain, Kaide Ellis, Tyrell Fuimaono and Brayden Wiliame made their club debuts. St George Illawarra averaged more metres per kick (29) than any other team. The NRL average was 26.8m. Belying their ladder position, the Dragons achieved the highest percentage of tackles from those attempted per game (89.5 percent). They missed only 5.9 percent of their tackles (1st in league).

St George Illawarra made the most overall tackles during the regular season with an average of 380.7 per game.

Best finishes of 2020: Dragons escape with win against Bulldogs
NRL.com takes a look back at the best finishes from the 2020 Telstra Premiership season

https://www.dragons.com.au/news/202...020-dragons-escape-with-win-against-bulldogs/
You must log in or register to reply here.