bluefox68 said:
Apparently, if things fall into place, he could pocket $1m for his next fight!!!!
Click to expand...

Not unless someone gives him $1m for no apparent reason

well that fight should put to rest the "Gallen has no knockout punch,- couldnt punch a hole in a pudding" theory.. I guess Nate Myles was responsible for that ... they should study that guys scone and design a helmet from it to lessen impact of concussion.

shaggs said:
The best thing about Gal promoting himself as a prize fighter and getting these main event PPV fights, is the exposure the younger blokes get.

How many of these guys would ever get a chance to feature on a PPV event? A lot of boxers spend there life fighting at Bankstown RSL or Wueenbeyan bowls club.
Click to expand...

gal the real deal, could become a promoter. like bill mordey

gal next fight could be $1,5 million pay day

Paul Gallen has made a "stupid" decision to get in the ring with heavyweight phenom Justis Huni and will try to stave off an inevitable battering with dirty tactics.

That's the verdict from fight promoter Dean Lonergan, who has confirmed a mid-June date for the bout between the undefeated former NRL star and 22-year-old Olympic hopeful.

In a pointed tirade, Lonergan savaged Gallen's boxing ability but paid him respect for putting himself in the position to command a showtime fight for the biggest payday of his career.


"June 16 has been locked in and agreed by both sides including Main Event. We're just working our way through a contract that's very long and he'll have it in 1-2 days," Lonergan told Wide World of Sports.

"At the end of the day Gallen is nothing more than a circus fighting bum I'm going to be feeding to the beast that is Justis Huni. And this is the most stupid decision he could have made for his personal health." 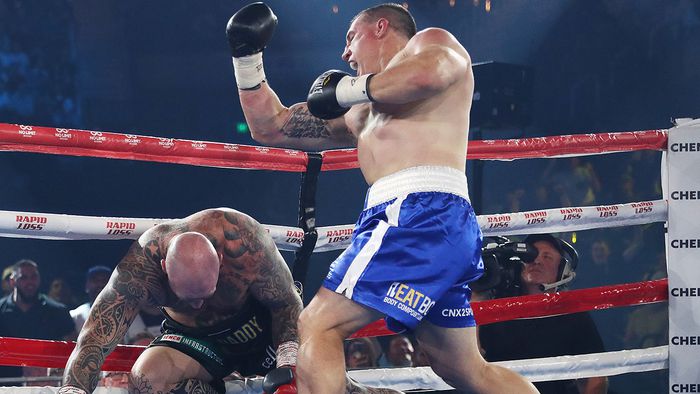 Paul Gallen throws his final punch in his first-round TKO defeat of Lucas Browne. (Getty)
The Kiwi promoter said the venue for the fight is still yet to be finalised but it's understood the ICC Convention Centre in Sydney and Qudos Bank Arena have been mentioned along with Nissan Arena in Brisbane and Gol"He's catching Justis Huni at the worst possible time he could possibly catch him. Justis is coming out of the amateurs and is still learning to sit down on his punches," Lonergan said.

"So instead of this being a merciful one or two round KO, this is going to be a long drawn out beat-down over four or five rounds. Paul Gallen is going to question the sanity of getting in the ring with this guy."

Negotiations came to a head last week when Gallen told Lonergan to "sharpen his pencil" after declaring the initial offer wasn't good enough. The promoter said the counter-offer will be the biggest payday ever for the former Sharks captain.

"After he said that we sharpened our pencil and it couldn't possibly get any sharper than what it is," Lonergan said.

"It's that sharp we've nearly taken all the lead out of it and Paul Gallen has probably got the best deal of his boxing career but his entire life. From a financial point of view this is a very good fight for him. From a 'Do I ever want to get in the boxing ring after this fight' – this is a very silly thing to do. 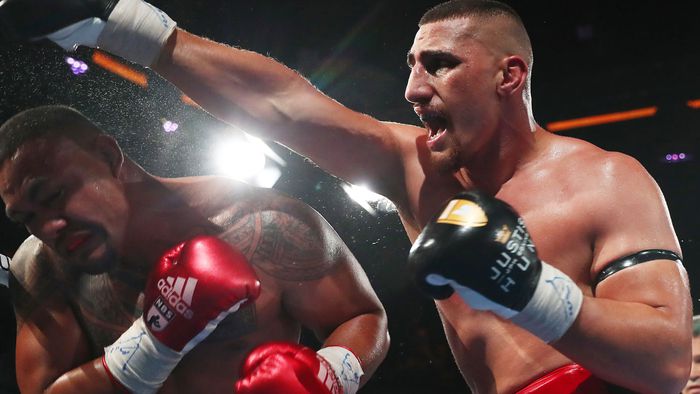 Justis Huni (right) won the national heavyweight title on his pro debut. (Getty)
"It wouldn't surprise me that he makes more money out of this fight than in a single year in his football career or any other fight he's had.

"I respect Gallen's bravery, he's got watermelon sized balls, but he's also got large doses of stupidity to go with it because this isn't a smart decision for his health."

Lonergan proclaimed the undefeated ex-forward will need to fight dirty to survive against a "supreme athlete" like Huni.

"He won't be coming to fight or box he'll be coming to brawl. He will headbutt he will hit Justis low. He will be elbowing," Lonergan continued.

"This will be a baptism of fire from a dirty tactics point of view for Justis. This is not a do-or-die 50/50 fight this is stacked 70-30 leaning in Justis' favour because he's one of the best amateur boxers this country has ever seen.

"He's the first guy in 120 years in Australian boxing to come out of the amateurs and into the pros and win a national title. That alone makes him special." 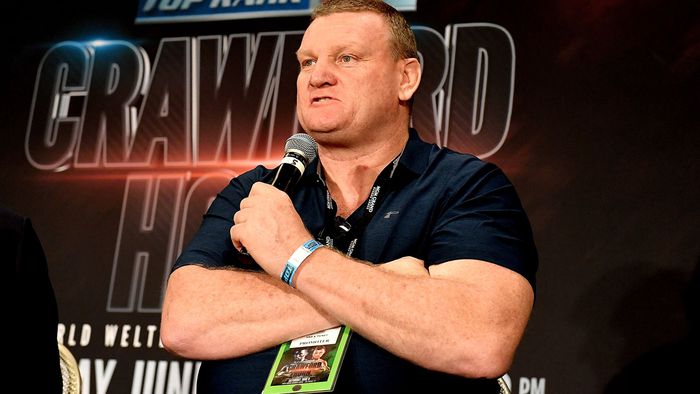 Fight promoter Dean Lonergan. (Getty)
Lonergan claims he's been forced into making the fight in six weeks with Huni also ramping up preparations for a shot at Olympic glory in late July.

He said he approached Gallen about a potential fight with Huni in the days following his win over Lucas Browne. Browne had to forfeit $100,000 from his purse to Lonergan to fight Gallen - with the thought of matching Browne up with Huni. But the devastating nature of the victory left him with no other choice than to make a Gallen-Huni fight happen.

"I walked away stunned from Gallen's fight because I released Lucas Browne for that fight on the basis we would have Justis fight him next," Lonergan said.

"We thought we've got to turn adversity into opportunity and we built a proposal and we took that to Paul last Thursday and now we just have to get the contract signed. We're not quite there yet but full expectations that June 16 we'll be fighting.

"He thinks he can win – but he's either Australia's bravest or stupidest man. From a boxing point of view he's just

another bum I'll be feeding to my beast."

Gallen has definitely brought back some interest into" prize fighting " boxing Here and probably Overseas as well. His opponents should thank him for that. My personal view is he's done enough.... Proved himself enough that the magnetic strips worn thin. Looking after Family is also about being you as they grow and develop and not a punch drunk rummy.

I used to show respect to the punch drunk ,alchos in the pubs in my younger days ,and in return I heard some pretty Amazing stories . From guys that lost their families , jobs, respect of peers , etc, as the effects of concussions , took control of their lives. one fellow had fought for australian heavyweight title , but was more proud to have walked the owen stanleys in ww2 eating bully beef , nearly starving fighting Japanese .etc. I really respected that guy even though he was local drunk! we only got one brain and I just hope Gallen doesnt go one fight too far as most do. What more does he have to prove ?
I know the Pre fight Hype is all about generating interest and Dollars , But " another bum to feed my beast" ? I dont think Ill bother watching it after that. Certainly wont pay to watch it.
You must log in or register to reply here.
Share:
Facebook Twitter Reddit WhatsApp Email Share Link