It's another Monday which brings with it the new focus on yet another huge Round of Footy. We take on the panthers this Thursday night in what should be an absolute bumper clash. Regardless of ladder position, this rivalry between us and Penrith has really grown over the last couple of years. In fact, it's grown to the point where they're now my second most hated team behind you know who. I just hate Penrith. They've become self-entitled, cocky, arrogant wankers. Been a lot of feeling in our games over the last two years and I expect this week to be no different. So, not only is it a huge game because of the rivalry, but also because it's 1st vs 5th and once again, there's a lot riding on it.

It's hard to know what to expect from Penrith this week because they have so many injuries and are pretty depleted. No Cleary, Luai, JFH, Martin, May and possibly still Edwards. That certainly helps our cause. However, they're first for a reason and they're the defending premiers so even with that side, we still can't take them lightly. As soon as we take them lightly, that's when they'll pull our pants down yet again. It's the Panthers for God's sake! I still think it'll still be a massive challenge and another good chance to see where we're really at. They still have superstars like To'o, Crichton, Leota, Koroisau, Kikau, and Yeo playing so we're still going to need to be on our toes. The guys that are in for all their injured or suspended stars are still good quality too.

For us, once again it's about going up those levels that JD spoke about the other week. Every game from now on is bigger and more important than the last so we need to step up those levels every week, this one is no different. That last game against the Eels was simply brilliant and if we go out there and play like that on Thursday night, then we'll be very hard to beat. But that's the challenge, can we go out there and back it up? I think we can, but time will tell. Complete your sets, execute and show the kind of defensive resolve we did last week. We get two or three massive ins this week with Graham, Burgess and potentially Ilias all back on deck for this monster clash. That'll be a huge boost for us. I'd just really like to see us go out and stick it to Penrith in front of our home fans in a high-stakes game.

God I just hate these guys and hate that club so much! I'd love nothing more than to get one over them and continue our run this week. That Grand Final last year still burns as I'm sure it would for the players. We have got to use that as motivation and unleash the rage! So, it's another huge game but I think we can do it. I know we can do it!! Let's go!!

South Sydney superstar Latrell Mitchell failed to finish training on Monday and left Redfern Oval with his right groin heavily iced.
Mitchell, whose excellent form is a large reason Souths have won six of their past seven games, came from the field midway through the club’s main session. He immediately consulted physio Eddie Farah and the club’s top medico Travis Touma.
After being put through a range of stretches on the ground, Mitchell had his groin iced and took no further part in the morning session.
Souths have a short turnaround to Thursday night when they host premiers Penrith at Accor Stadium. It is the first time in 23 games the Panthers will start as outsiders with the bookies.
Back-up Bunnies fullback Kodi Nikorima has been battling a hamstring injury and is at least another week away from returning. Blake Taaffe is the likely fullback option if Mitchell fails to overcome his injury.
Halfback Lachlan Ilias skipped the first part of Monday’s blowout because of an ongoing back issue, but later joined the main group. Izaac Thompson, the powerhouse rookie winger, hit the showers early because of a right quad or groin strain. 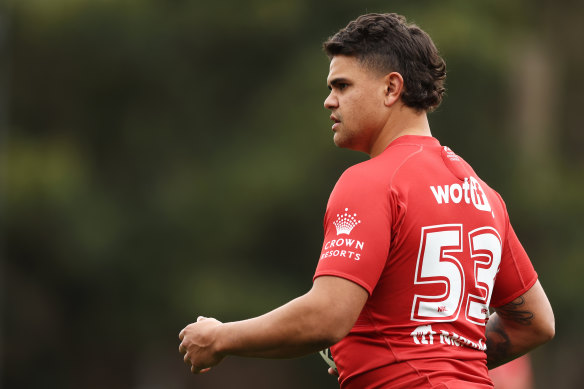 Latrell Mitchell did not finish training on Monday because of a groin issue.Getty Imagesnone
Coach Jason Demetriou told the Herald the club was just being cautious with Mitchell.
“We’ve got back-to-back short turnarounds, he had his biggest numbers for the season on the weekend [against Parramatta] in terms of running loads, so we’re just resting him up,” Demetriou said.
“He got through the main stuff defensively that we wanted him to get through. It wasn’t worth risking him. He’s tight there [in the groin], and when they’re tight we won’t push it.”

In brighter news for Souths, Campbell Graham (cheekbone) completed training at right centre and will return against Penrith, while Tom Burgess, who was restricted to light duties, is also in line for a recall.
Penrith received some good news with back-rower Liam Martin expected to miss only a week or two because of an ankle injury. Martin was spotted without a moon boot over the weekend.
Fullback Dylan Edwards is also expected to return after being a late scratching for last week’s match against Melbourne.

Would you consider resting latrell this round considering we need him for the finals ?

Fox just reported that Souths are adamant that Latrell is right to play, also said Illias should play as is Campbell and Tom

Ughhh how frustrating that our best player tweaks his groin ahead of our best game! Seems to be some real mixed messages about it. The club and the man himself seem adamant he'll be good to go but I guess he's very much under a cloud and we'll have a nervous wait until Thursday. I will say that if he's not 100% then we should rest him. That would obviously hurt us in this game against Penrith but you gotta play the long game.

Defense the focus again for Hame ahead of Round 23: https://www.rabbitohs.com.au/news/2022/08/15/defense-the-focus-again-for-hame-ahead-of-round-23/

Junior is up for Thursday's massive challenge: https://www.rabbitohs.com.au/news/2022/08/15/junior-is-up-for-thursdays-massive-challenge/

Here's my predicted line up for Round 23 against the Panthers,

Pretty self-explanatory really. Trell will be named despite his injury cloud, Taaffe to replace him if he's out. Graham slots back in on that right edge with Izaac Thompson. Been reported that Izaac was wearing Red at training today with Paulo in Green so that indicates JD has gone with Thompson! Ilias back in with the pack remaining the same apart from big Tommy returning on the bench.

Just wanted to say I hate your team and best of luck.
H

Its fine because we rabbitohs after your grand final BS and all the grandstanding and lies , and arrogance think your all shithouses.

Rabbitohs Line Up For Round 23 Against Panthers: https://www.rabbitohs.com.au/news/2022/08/16/rabbitohs-nrl-squad-for-round-23-against-panthers/

Yoohoo pretty damn happy with that line up!! It's a very strong side. Great to see Trell named, I assumed he would be and I know it doesn't mean he's confirmed but it is a good sign. Stretch is back!!! How bloody good. Surprised to see Jaxson keep his spot on the wing as Izaac was training in the red yesterday but I'm not complaining as I expected Jax to be there before the news yesterday. Lachie back too!!

In the pack, DSF comes into the starting side with Hame going to the bench. That's a little surprising but again, I'm not complaining. Tom is unfortunately still out so not sure what the go is there as the club said he'd be sweet.

Right back at ya mate the feeling is mutual great we can be honest with each other!