TruSaint said:
You know where your club is at when there is discussion of a once contracted player, whom has since left to 2 other clubs, has had bad blood with our management via his dad, is injury prone, has barely played in recent times, is on massive coin, we are nearly capped out...... becomes a priority.. Yes ladies and gents, this is STGI v2019...
Click to expand...

I've seen enough to say that neither players or fans/supporters are keen on Mary and yet the Board and management are hell bent to keep him in place. This will end up in tears.

Gus is wrong, the Board is wrong and our CEO is wrong. There is no way Mary will last in the head coach position in 2020.

Bird is in it for the money only, which for a young man with his ailments is understandable. He was at his peak 3 yrs ago and has only played in 35% of available games since.
He's undoubtably a very good player when switched on, however, it appears than on button has been stuck in the off position for a while now and McGregor is not the coach to fix his ways.
Good luck Ivan!
Click to expand...

Demanding five eight of fullback hahaha move along jack your a centre and maybe a lock
Last edited: Sep 24, 2019
W

Hopefully....or does that mean other clubs are nervous about him or, perhaps I am just cynical
M

possm said:
I've seen enough to say that neither players or fans/supporters are keen on Mary and yet the Board and management are hell bent to keep him in place. This will end up in tears.

Gus is wrong, the Board is wrong and our CEO is wrong. There is no way Mary will last in the head coach position in 2020.
Click to expand...

Looks as if he just did an ACL at training. I feel for him big time but I’m pleased we didn’t sign him.
L

Ditto
Still he’s just another one lost thru incompetence.

You could probably field a few Australian teams of lost players over the years since Frank Facer’s departure.

Yeah that looked painful.. Although he did limp off unassisted, so hopefully not too bad..

But I have to ask, what was going on with his hair?

Poor bugger, Jack is also riddled with arthritis. Having had a full knee reconstruction, l certainly feel for the guy.

Feel for the guy. Hope he doesn’t end up another Kyle Stanley.

This is probably the worst I've felt about an NRL injury in many years. That goes for players from my team.

he is starting to make brett papworth look good.

I seem to remember that his medical bills for treatment was around $26,000.00 per year and I think we were paying that for him.
What ruined it for him was his father, maybe someone has a better memory then. Me
G

The Warriors will turn their attention to troubled stars Tevita Pangai jnr and Jack de Belin after missing out on Canterbury forward Adam Elliott.

Elliott’s decision to commit to the Bulldogs on a three-year deal has triggered a domino effect in the player market that could result in Jack Bird returning to St George Illawarra.


Brad Fittler and Andrew Johns reveal their footy tips for Round 14.

The Bulldogs and Dragons were in the mix for Elliott’s services, with the Red V now likely to ramp up talks with Bird's management after missing out.

Pangai jnr is also looking for a new home.

Brisbane is expected to sack the Tongan international for a series of biosecurity bubble breaches that have attracted a proposed fine of $30,000 and an indefinite suspension.

The NRL handed Pangai jnr a breach notice that prompted chief executive Andrew Abdo to conclude he was guilty of "committing multiple contraventions of the protocols and showing a disregard for the league’s rules." 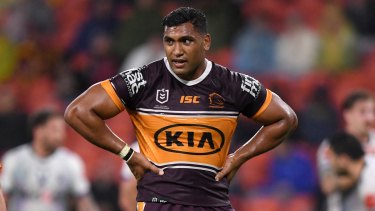 The latest breach was a visit to a barbershop that had been raided by police over its association with motorcycle gang the Mongols.

The Roosters moved quickly to distance themselves from Pangai jnr.

"I don’t know what’s going on up there but we’ve worked really hard – as you can see – for the type of player that we want," said Roosters coach Trent Robinson. "And he’s not going to fit that mould."


However, the controversies aren't likely to dissuade the Warriors, who are revamping their roster ahead of the arrival of new coach Nathan Brown next season.

The club on Wednesday trumpeted the signing of Eels prop Kane Evans on a two-year deal and has also secured the services of Dragons centre Euan Aitken. The next priority is a superstar forward and de Belin and Pangai jnr fit the bill.

The Warriors haven't awaited the outcome of de Belin's sexual assault court case to make him an offer. A decision on a motion that will determine whether de Belin's trial will proceed is expected to be handed down this month.

The former NSW lock is mulling over a deal which will give him a $200,000-a-year increase on his current salary, despite the fact he hasn’t played a match for almost two years under the NRL's no-fault stand down policy.


The Dragons are also keen to retain him after standing by him while awaiting a court outcome, but the club has distanced itself from any pursuit of Pangai jnr.

Meanwhile, like Pangai jnr, Bird could also be looking for a fresh start.

The former Shark hasn’t been able to make an impact at Red Hill due to injuries and is torn between proving his worth at the Broncos and returning to Sydney.

The Broncos have allowed Bird to explore his options and the Bulldogs and Dragons have been in talks with his management. Brisbane is prepared to subsidise his salary in order to get Bird off their books. 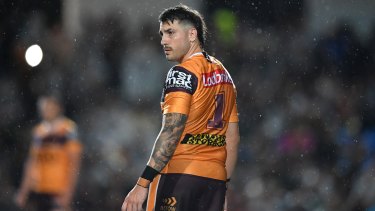 Elliott’s signing is an early show of confidence in incoming coach Trent Barrett.

"Adam has become a fantastic leader at Belmore and when he runs onto the field for the Bulldogs you can feel the passion he has for the club," said Bulldogs coach Andrew Hill.

"He had also shown during the early part of this season that he was one of the form back-rowers in the competition.

"He continues to do a tremendous amount of work off the field and has always been the first one to put his hand up to offer his time to a charity or to represent the club at a community visit.

"We look forward to seeing him continue to represent the Bulldogs with distinction over the next three years."

Meanwhile, former Kangaroos prop Shannon Boyd has been granted a release from his Titans contract and he will retire to the family farm in Cowra. Boyd's departure after a series of injuries will free up salary cap space for the club.

Subsidised or not, watching Bird go round would be like watching a ticking time bomb which is bound to explode and waste your money. Not a wise move.

thebigredv said:
Subsidised or not, watching Bird go round would be like watching a ticking time bomb which is bound to explode and waste your money. Not a wise move.
Click to expand...

To be an even viable proposition they would have to tip in around 700k.

And it would have to he only a 1yr deal
B

Too me it is sad to see Bird in this position and Euan going. They played juniors together for the Dragons both were destined to be stars I thought.