I know it's anecdotal but seeing many died in wool "keep the faith" "you're not a fan if you talk down the boys" types, who have endured so much shit from this club finally breaking over this and rightfully so.

Matua said:
The Warriors got played by O'Sullivan big time and George is clearly out of his depth. What's worse is that this has me agreeing with Kent (about sending it to the integrity unit to investigate) and now I feel dirty.

Seriously, burn this club to the ground and start again. It's just too rotten to continue in it's current form.
Click to expand...

Hundred percent it should go to the integrity unit.

I'd even say the NRL should be obligated to investigate this, not just because it seems dodgy, but because a club falling into a point where they're spending 700k of their cap for next season on a bloke who has left the club and only had a player option indicates they aren't suitable to run an NRL team and it damages the competitive integrity of the competition.

Get Kevin Campion back involved with the club, look at page 2 of this old thread from when Lodge signed, bang on the money

Beavers Headgear said:
Get Kevin Campion back involved with the club, look at page 2 of this old thread from when Lodge signed, bang on the money

it really is time for a no dickheads policy top to bottom - people like Campion, Cleary, Luck, Jones, Guttenbeil, Price etc... But given his media appearances, it looks like the owner is a dickhead and he's driving the culture...

This smells incredibly fishy, on no level does it make sense - and it seems like the club, rather than Lodge, has something to hide - which is astonishing really

Benek said:
This is so absurd I can hardly believe it. How inept is our management to let something like this happen?

Sign a player to a NZ team. Next year he decides he doesn't want to move to NZ (despite that not even happening for 6 months) so he quits mid season. Allow him to leave with no replacement. Them pay him out the next 1.5 years of his contract!

What power does Lodge hold over the club? I can't think of a single explanation for how this could be allowed to happen except some kind of blackmail.

If we don't get a detailed official response soon this could mark the beginning of the end of the club.

Imagine how the other players think! They just saw a guy walk out the door with more than a year's worth of free salary for quitting, and it's likely more money than most of them will make for staying and playing.
Click to expand...

It's hard enough being a Warriors fan with the on-field performances, and having the club not played at home for so long.

Then this kinda thing happens. Makes you really wonder how many fans have left and started supporting other teams.

Don't be like that, she had nothing to do with Logde

Scott said:
If Cameron George can't explain due to confidential clauses etc, then he needs to be fired immediately by Mark Robinson. MR was very honest with his thoughts around POS, now it's time for the same regarding CG.

This whole situation has got me very very down about the state of the whole club. I felt during the height of the pandemic that the club might not survive. This feels like another nail in the coffin. I have no idea where we go from here.
Click to expand...

If Robinson wants to to step up as an owner and endear himself to us fans, he can start by sacking George over this unless there is a bloody good explanation. Brown too if he's involved.

So it looks like it was Robinson's call to pay him out of his option for next year because the two guys just didn't like each other.

Shit business decision because it affects the salary cap. Still don't understand why we had to pay him out when he wanted to quit. Maybe he didn't want to quit, and this was the only way Robinson could force him out?

George may not have had anything to do with it!

A heated altercation between Matt Lodge and the owner of the New Zealand Warriors has been revealed as the reason behind the forward’s abrupt departure from the club.

Lodge was released from the final year of his contract last week amid claims he did not want to relocate to New Zealand with the team.

According to Robinson, the pair clashed at the Belvedere Hotel near Redcliffe late 2021.

“We had an argument in a hotel, two alpha males in a pub last December,” Robinson told the Daily Telegraph.

“Two days later we shook hands and moved on but it never came right.

“He was unhappy so I bought him out of his option for next year and we parted ways.

Pressed on what the disagreement was about Robinson remained tight-lipped.

“Just two men and attitude and whatever. It’s seven months ago.“There’s no bad blood with Matt Lodge at all.” he said.

Robinson did not dispute the payout figure and was adamant Lodge was entitled to it.

“It was a simple business transaction. He had an option for next season so he was entitled to a severance package, as would any employee out there who has a contract with their employer.”

Earlier in the week NRL360’s Paul Kent called on the NRL Integrity Unit to investigate the golden handshake.

“That’s the thing it does go on their cap regardless of the fact whether he is there or not,” Kent said.

“Second to that you have got to ask, the fact that the payout is in Lodge’s favour suggests that Lodge has done nothing wrong.

“But the fact that the club won’t give any details about why they chose to release him immediately and pay him out, I think at the very least the NRL Integrity Unit needs to have a look at it.”

The Daily Telegraph’s Phil Rothfield, meanwhile, questioned the logic behind the Warriors’ decision.

“If any football player walks into his employer or any employer and says, I have had enough and for personal reasons I don’t want to move my family to New Zealand, say OK fine that’s the end of the contract,” he told NRL360.

“But there is a lot of fans in New Zealand wanting to know why he got $700,000. It ruins their cap for the remainder of this year and next year.”
Click to expand... 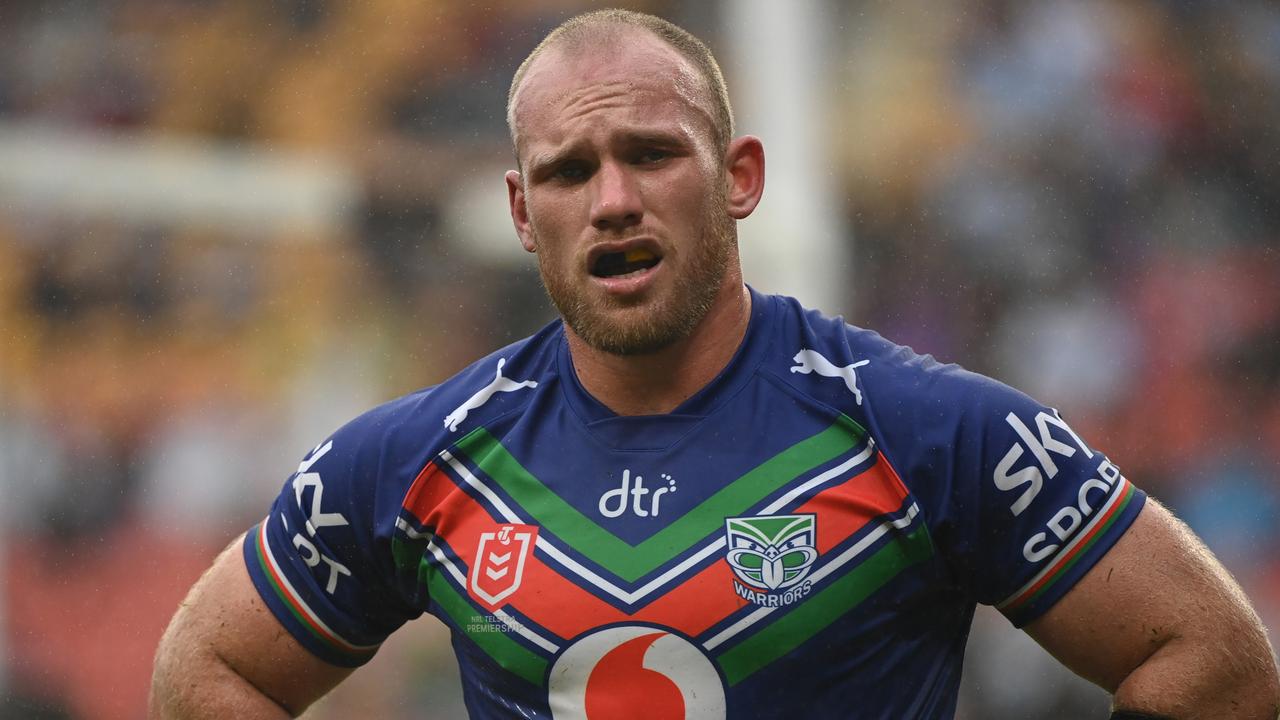 Wow. Where the Benny hill music ?

George must go, terrible press conference, but he is best mates with the owner so will be ok

argument with the boss back in December, but only pulls the pin this week ? C’mon lads you can do better than that. Large red flags floating around about Robinson here as well now, happy to pay the 700k coz they had an argument 7 months ago that they couldn’t get past ?

At least as George said, “the lads are looking great at training”
Last edited: May 26, 2022

Two Alpha males.
I wonder who the other one was?

Rich102 said:
Two Alpha males.
I wonder who the other one was?
Click to expand...

Can you imagine Politis at the pub drinking with the players ?

Maybe we were clearing the decks for payne haas?

So he can sign with us for a million, quit the next day and still get paid.

What's getting to me is the amount of money that just seems to have been 'thrown around'. I work in a supermarket! I'm not picking up three quarters of a million dollars in a hurry.

So here's my footy club just having a laugh about that, whilst making it less likely they're going to provide me with much football joy next year either.

So, Lodge wants to go. He had an argument with Robinson. He doesn't like the club. He doesn't want to move to NZ. ok. I still don't get the paying him 700k bit.

Really sad listen on SENZ this afternoon, Warriors fans since day one saying they are done with the club and have had enough etc

interesting finish to the show, McIvor came in before hosting his Motorsport show, saw the switchboards lit up, so put in some calls to his contacts within the club with the question

“who is running the club, the owner or the CEO”

he also said the club are repeating past mistakes, as he know for a fact that Cleary left because of bad management, and Ackland got out of rugby league because he couldn’t stand the management

Rich102 said:
Two Alpha males.
I wonder who the other one was?
Click to expand...

I would like to hire O'Sullivan for my next contract negotiation. The dude is clearly a twat but he's damn effective for his clients.
P

Hahahahaha. Mark Robinson has such a small cock that he needs to reference himself and Lodge as 'alpha males'. What a f**kwit. And I would suggest Lodge is more a neanderthal than a male human, and certainly no one who holds a young family hostage is anywhere 'alpha male' status.

Then he says 'I bought him out' of his contract, like he's Bill Gates. And 'he didn't like playing for Mark Robinson'. f**k me. No one plays for you, you merkin. They play for the Warriors. They actually play for us.

I hope he, or someone he knows, reads this site. f**k you Mark. Go and find another play thing.
P

I don't think Robinson, or George, realises how f**king stupid that story makes them look.

They clearly mismanaged a guy who is a complete f**kwit, and because Robinson was in a bar - and why he should be drinking with players is beyond me - and did his 'alpha male' thing with Lodge, now that player is gone. And they couldn't sort it in the 5 months since that incident. And we are paying him $700k of our salary cap for him not to play for us.

And can someone explain to me why, when Lodge had a contract in his favour for 2023, that when he chose not to take it up (allegedly) that we have to pay him? Or does that suggest we were so soft we just said OK we give up, you won't say you quit but we admit we're moving you on?
You must log in or register to reply here.