Does the WCC even have a point anymore?

The following was published today by the Sydney Morning Herald (source: https://www.smh.com.au/sport/nrl/nr...games-under-new-proposal-20220926-p5bl74.html) -

The NRL is set to reduce the amount of Friday night double-headers in next year’s schedule and add a third Sunday game in the latest overhaul of the competition structure.

After years of clubs struggling to draw crowds to the Friday 6pm kick-off, the NRL is in the advanced stages of working on a draw which will remove the timeslot from several rounds in a 17-team competition.

According to sources familiar with the situation, the NRL has discussed a proposal which will scrap the early Friday kick-off in rounds directly following each State of Origin match and replace it with a Sunday night fixture.
It will allow the NRL to have up to three matches on Sundays, with the last fixture proving a ratings hit on Fox League when it was used for the first five weeks this season.

While the NRL won’t completely abolish the first of two Friday night games, executives have discussed Sunday night being a more fan-friendly window, particularly for matches played in Sydney and Brisbane when fans struggle to get to venues at the end of the working week.

The change will also help alleviate concerns from the Rugby League Players Association, which has lobbied for all NSW and Queensland players to have a mandatory stand-down period after Origin matches.

All three interstate fixtures will return to Wednesday nights in 2023 under the new television rights deal with Nine Entertainment Co, the publisher of this masthead.

The issue of representative players potentially missing club games straight after Origin matches is set to be finalised during ongoing talks between the players’ union, clubs and the NRL over a collective bargaining agreement, which has dragged on into grand final week.

But the switch of a Friday night game to Sunday night will mean players from at least two teams will have an extra 48 hours to recover from the gruelling Origin contests.

Foxtel has had exclusive rights to the early Friday night kick-off and often captures a market which will stay with the subscription provider for the second match, which is also broadcast by Nine on its free-to-air platform.

The NRL is planning for next year’s 27-round season to start on March 2, a week earlier than usual, in a radical change first revealed by the Herald.

The longest NRL season in history will also include each club being allocated three byes across the course of the campaign, with a concentration of those around the Origin period.

The NRL has still not given up hope of starting the competition proper in the United States in a match which would feature Manly, but is running out of time to organise the logistics and tap into the growing and lucrative American sports betting market.

The introduction of the Dolphins to the competition will also create the need for at least one team to have a bye each week, including Magic Round in Brisbane.

Wayne Bennett’s Dolphins have been guaranteed a spot in the three-day festival, which brings together all 16 teams to one location, and is being discussed by the AFL as it plans to add an extra round to its season in 2023.
Click to expand...

Perth Red said:
Wonder if we’ll get a world club challenge or if the nrl club will bail again?
Click to expand...

Pre-season will already be short due to world cup.

Logistically i think its too hard unless St Helens want to come to Australia considering the WC is in England. Cant be expecting players from Australia to make 2 long trips to Europe in 3 months.

So if its played should be in Australia at the Blue & Gold fortress of Commbank Stadium.
B

westerntiger said:
Exactly it's only a few games. Ridiculous playing at a totally unsuitable stadium.
Click to expand...

Friday 6pm should be scrapped entirely

Unless its played in NZ! Ratings wise it does surprisingly well. When we go to nine games we are likely to end up with friday 6pm and sunday 6pm. There aren't too many other stand alone slots left.

I'd prefer the Thursday night game gone to be honest. Horrible time to go watch a game

Sharks and Cowboys both miss the 8 unless they get another easy draw.
M

The Friday 6pm game is the one I watch every week. Any game kicking off after 7pm is too late for an old fart like me (including SOO and GF).

What a misleading title for the article.

They are talking about not playing it in the 3 weekends following origin where I suspect there will only be 4-5 games anyways due to byes.

Seems they will be playing it every other week.

Can't be avoided due to the circumstance, but f**k that place. Glad it's just the two. 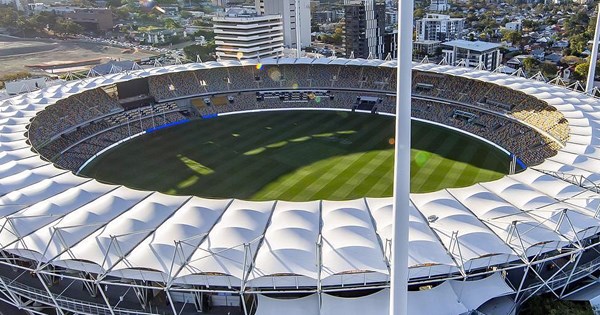 The Brisbane Broncos will play three home games at The Gabba during July and August next year while the FIFA Women’s World Cup is running in Australia and New Zealand.

Last Week said:
I'd prefer the Thursday night game gone to be honest. Horrible time to go watch a game

Why have you got 9 games?

And you have 9 games with only two on FTA!

big hit! said:
Why have you got 9 games?

And you have 9 games with only two on FTA!
Click to expand...

Because we'll eventually have a ninth game.

And I didn't say anything about what games were on F2A. No reason why Nine can't pick up the Sunday night game. Two games between their Sunday night news.

Doesn't matter though. I'm of the view that the game can and should take less money for preferential control over kick off times.

Here's hoping the schedule provides some blockbuster matches to help fill the bigger venue. Zero hope the lower stands will be moved in during the AFL season though, better bring my binoculars...
B

Last Week said:
Because we'll eventually have a ninth game.

And I didn't say anything about what games were on F2A. No reason why Nine can't pick up the Sunday night game. Two games between their Sunday night news.

Doesn't matter though. I'm of the view that the game can and should take less money for preferential control over kick off times.
Click to expand...

The NRL isn't the NFL or the EPL. That will never happen.

At the very least we need to wrestle back control of scheduling who plays when. AFL still have control of theirs and dont seem to have a problem getting a shed of money for tv rights.
We need to be scheduling our big drawing games in the best spots, not on a Thursday night!

Went to Marvel stadium for the 2007 Prelim final.

Wasn't a good day and wasn't a great ground to watch Rugby League but Storm don't really have any options unless they wanted to play at the MCG but then 12k in that coliseum wouldn't be a great look.

King-Gutho94 said:
Went to Marvel stadium for the 2007 Prelim final.

Wasn't a good day and wasn't a great ground to watch Rugby League but Storm don't really have any options unless they wanted to play at the MCG but then 12k in that coliseum wouldn't be a great look.
Click to expand...

I went to test match there when it was full and I thought it was pretty good. Had the roof closed and the stands brought in though which helped with the atmosphere.
You must log in or register to reply here.