In Fitzy We Trust

The black could be a lot blacker

Weaponhead said:
The black could be a lot blacker
Click to expand...

Well said weapon! I would also say that the black looks 2021 as opposed to the “All Blacks” black of 2022

Call me picky, but the merkin could have had a haircut for the photo. Blacker blacks and chromier domes. CHRIST SAKE FITZY.

chewsta said:
Call me picky, but the merkin could have had a haircut for the photo. Blacker blacks and chromier domes. CHRIST SAKE FITZY.
Click to expand...

He should be wearing a long sleeved polo - tattoos offend the conservative shire boomers and possibly make baby Jesus cry….

How did this thread get derailed onto looks and merchandise? Let’s bring it back to FItzy.

In FItzy we Trust.

By the way, loved him in the sky blue polo

AWESOME to see the boys in the photos on the website.

Incoming coach Craig Fitzgibbon was so mindful about being publicly paraded in Cronulla colours before November 1 that he made sure the Sydney Roosters gave him the green light before fronting a sponsor’s lunch on Friday.
“Technically we’re still paying ‘Fitzy’ for another week – we might have to ask for some compensation,” Roosters supremo Nick Politis said with a laugh. 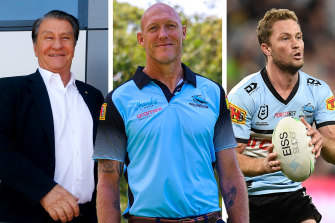 Craig Fitzgibbon was worried about being paraded in Cronulla colours while still being paid by the Roosters.Credit:SMH
“Of course I’m joking. But it says a lot about Fitzy. It sums up what a decent bloke he is. That’s why he will do well down there.”
Sharks boss Dino Mezzatesta phoned Roosters counterpart Joe Kelly on Friday to ask him if it was OK for Fitzgibbon to speak to the media. Fitzgibbon had also reached out to Roosters coach Trent Robinson in recent weeks to make sure he would not be offending the Roosters by starting early in the Shire.

Fitzgibbon impressed everyone in the room at Kareela Golf Club on Friday at the club’s rescheduled grand final luncheon on Friday, his first official duty as Cronulla coach.
A couple of key issues he didn’t talk about, however, were his excitement about working with Matt Moylan and how his experience in dealing with concussion with the likes of Boyd Cordner and Jake Friend could benefit Sharks skipper Wade Graham. 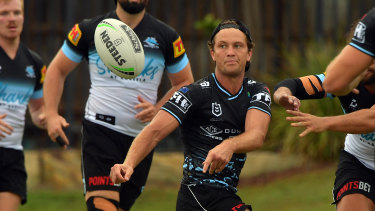 Matt Moylan at Sharks training.Credit:Sam Mooy
Moylan took a $500,000 pay cut for next year, and part of that decision was the chance to work with Fitzgibbon.
“I had some in-depth conversations with ‘Moyza’ during the year,” Fitzgibbon said. “He’s always been a class player. He’s had a bit of a rough trot with injuries, and he got busted at an important time for the club last year.

“I’d worked with Moyza at the rep level, I was an assistant to Tim Sheens with the Australian team in 2014 and I knew what a good guy he was. I always respected him as a player, he turns up everywhere, and because he’s so unpredictable, opposition coaches used to feel a little bit of angst when preparing to play against him.

“I’m glad he’s backed himself for another year and, hopefully, I can help reignite that flair we all know he has.
“Everyone in rugby league was hearing about how fit and healthy Matt Moylan was after the pre-season. I’d like to think by the end of this pre-season they’re saying the same thing again.”
Moylan is in a four-way halves shootout with new recruit Nicho Hynes, Luke Metcalf and Braydon Trindall.

Skipper Graham has enjoyed a long spell to overcome his latest head knock and Fitzgibbon will adopt the same ultra-cautious approach the Roosters took with Cordner and Friend.

Fitzgibbon praised Graham for making the tough call to miss the second half of the season to give himself the best chance to recover.
“I had a chat with Wade during the week about how we’ll carefully program his way back to the risky side of training – we definitely won’t put him at risk until he is 100 per cent sharp in his footwork and with his reaction speeds to make sure he’s in safe positions to make tackles,” Fitzgibbon said.
“He’s in good nick, Waydo, and mentally he’s excited for the season, which is half the battle. He was aware he needed a rest and wasn’t quite right, so it was a courageous call to sit out half the season. That extended freshen-up has put him into a good position now.” 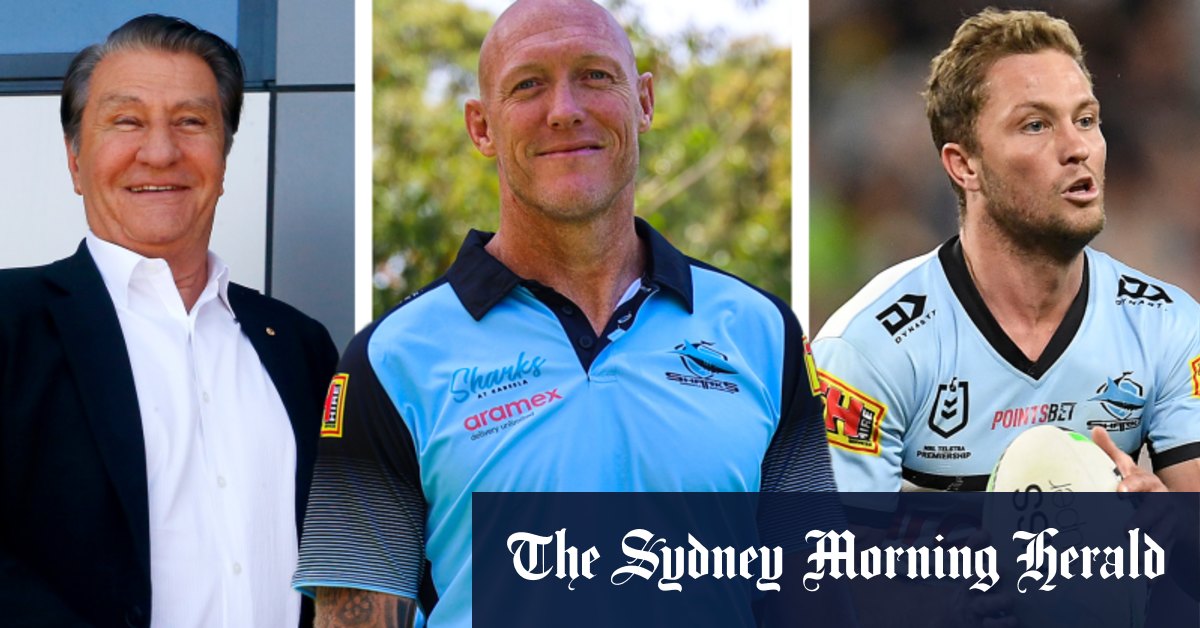 In-coming coach Craig Fitzgibbon on not wanting to upset Nick Politis, plus getting the best out of Matt Moylan and managing Wade Graham’s concussions.

Loving all these articles. Exciting times

Reading some comments that we will have to get politis permission to name the team…. Just bullshit commentary.

We have a coach with some real pedigree when it comes to man management and professional performance. We should be loving this approach from Fitz. Respectful and responsible.
C

we've weened the fat, recruited strongly not only skilled players, but professionals and good people
the development brings excitement
a juniors system thats starting to thrive after years of hard work
we have a well educated, respected, down to earth, "no twats allowed" head coach
a heirachy behind the books that seems to know what they're doing
former players in gal and lewis around the club

fizman said:
I know this is really petty, and perhaps a sign of my age. Why couldn't our first photo of Fitz be taken in a brand new flash polo shirt that represents 2022?

I would really like to see what ADIDAS could do with our three stripes of Black, White and Blue.

It annoys me that he is trotted out in the 2021 shirt like some after thought.
Click to expand...

Since the 2022 NRL season hasn’t started and won’t until November 1, there might be contractual agreements with 2021 that must be met.

Someone name another NRL Coach with visible tattoos.
I can’t think of any others.

For this reason alone he has my vote

My guess is he will be disappointed in Moylan on game day. Be interesting after 4 games. At least we will be able to say ‘ we are waiting for combinations to form’. Hey we haven’t been able to use that one for a while.

Moylan one of the elite players in our club.
2

The re-signing of Moyza is the only thing I would query that Fitz has done to date. Must be a method to his madness though as he had no problem shedding Duges…Woods…SJ and Lesssgoo.

Keep in mind Dugan, Woods, Moylan, SJ and Chad all wanted to stay. Fitz decided Moylan was the one he wanted. Also that bill has gone from close to what 3 million to 350k!
2

Special K said:
Keep in mind Dugan, Woods, Moylan, SJ and Chad all wanted to stay. Fitz decided Moylan was the one he wanted. Also that bill has gone from close to what 3 million to 350k!
Click to expand...

Yeah that’s what I was getting at K…. He no doubt see’s something in Moyza that most of us don’t. Maybe it’s more of a mentor role he has in mind? I do like the attitude he’s taking with Fifi in regards to him making his own call. Sounds like Bomber encouraging the big fella to retire was devisive
in hindsight.

Ozzi_78 said:
Reading some comments that we will have to get politis permission to name the team…. Just bullshit commentary.

We have a coach with some real pedigree when it comes to man management and professional performance. We should be loving this approach from Fitz. Respectful and responsible.
Click to expand...

"Well lets not start sucking each others dicks quite yet" - Mr Wolf
You must log in or register to reply here.