Good luck Reece Walsh. Totally unfair they’ve thrown you to the wolves like this.
Good luck Gagai and Capewell the ball will be run at you two blokes all night. Try to forget how much your opposites f**ked you last time round.
Cant see us getting within 6 tries especially losing spark in Brimson and Grant.

Jai Arrow is currently being treated in hospital with a course of intravenous antibiotics.

Prior to joining the Queensland Maroons camp, Arrow was receiving oral antibiotics to treat an infection.

Team doctor Matt Hislop admitted Arrow to hospital to "get on top of it quickly”. 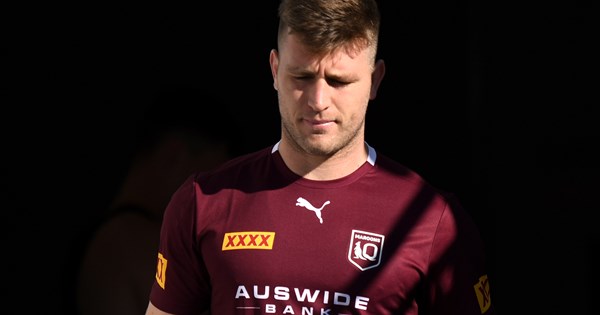 Jai Arrow is currently being treated in hospital with a course of intravenous antibiotics.

The Axe of Druss said:
Dear lord thats a team, on paper, that is easily 30-40 points less than the NSW side

Canard said:
I love it when NSW fans proclaim a dynasty after one game
Click to expand...

Did I? Just said the Qld team look awful on paper

Want some dip with that chip on your shoulder princess? Grant back in frame for game 3. Why do the benders keep doing this adversity shit?

Grant back in frame for game 3. Why do the benders keep doing this adversity shit?
Click to expand...

I'm not a medical expert, but I must admit I would prefer to stick with Andrew McCullough. After game 1 I'm against selecting players under a injury clouds and potentially jeopardise their season's. Aj Brimson was selected but clearly wasn't right and had limited impact. I'm not suggesting Mccullough is not a world beater either, but I would prefer to select players that are healthy.

That's not what its saying on NRL.com.

They have said that with Reece Walsh ruled out and Ronaldo Mulitalo withdrawing because of doubts on his eligibility. That Val Holmes will move back to fullback and Xavier Coates being rushed back into the team playing wing.

cane toads are the underdogs under siege

Where that rbm Merkin?

Disappointing from the Maroons, I thought they started with the right attitude but the attention to detail areas were lacking. Really poor of Feldt to have a loose carry and then for Holmes to throw it straight to Latrell. At 12-0 they just made it too easy for the Blues and they were able to coast to victory.

They didn't get dealt the best hand to be fair. Ponga has barely taken the field all year, Munster isn't 100% and losing both Grant and Mahoney hurt. Once again we're seeing the side effect of the Broncos, Titans and Cowboys struggling with a few of those reps letting the team down, or just failing to put their hand up for selection.

For Game III it will be a matter of hoping that a few players will be available and rewarding form. I can't see there being too many changes, I think they'll save that for next year.

Ruby Roux said:
our 1-7 are incredible
Click to expand...

the 3 fullbacks and simms and haas were standouts for me

those pests are very upset

bend over, pay back, get ready

Well, the title of this thread has to go down as one of the all time classic bell-end slurpers.
A

Holmes - Not a fullback.
Feldt - SOO career over.
Capewell - Not a centre but had a dig.
Gagai - Confidence down after being destroyed by Mitchell once again.
Coates - Needs to find some aggression.
Munster - Needs to pull his finger out. Clearly still not 100% fit.
DCE - garbage kicking game early.
Welch - didn't pressure Cleary enough.
McCullough - serviceable but lacking spark.
Papalii - strong but missing his usual impact.
Arrow - is Jai carrying an injury or has he gone soft since the Tedesco incident?
Kaufusi - SOO career going, going, gone. Made some poor decisions.
Fa'asuamaleaui - back to the bench for Tino as need more impact from him.
Hunt - QLD's best player on the night. Should have been there in Game 1.
Fotuaika - tried hard and keeps improving.
Fifita - a myth. Is he the new Dane Carlaw? C'mon Gordie fire him up!!!
Molo - a strong debut which should be enough to keep him there.
Last edited: Jun 30, 2021

I've seen calls for to dump Daly Cherry-Evans, but realistically who are you going to replace him with

Hunt is the most viable option, but I still wouldn't do it. This was in comparison to Mitchell Pearce who was given a million chances by not only NSW selectors but even media commentators.

I concede Queensland's attack was clunky. But it wasn't just Cherry-Evans that struggled. The team look out of its depth. It's very hard to single handily drag your team out of the melee with that kind of pressure against you. ‘Got to go in a different direction’: DCE savaged as Maroons urged to make changes

‘Got to go in a different direction’: DCE savaged as Maroons urged to make changes

www.foxsports.com.au
You must log in or register to reply here.

Without Cleary and Luai, are the NSW Blues really that good at all?