So, barring another f**kload of injuries next year, we should be ok. If we don't get a break with the cap until 2016 then it shouldn't be a big deal.

When we get that break, we'll have the chance to upgrade those who have earned it, bring in some quality from outside, or a mix of both.

As such, we're ok...barring another f**kload of injuries next year.

Be good when our backended deals are finished.

We'll be right this week if we're still paying morts.

There was an option for us to stop paying Morts this year but he didn't go for it - he exercised his option to keep getting paid. Luckily it's back-ended into 2016. It's only about $500k but.

oldmancraigy said:
Well, it's hard to blame just him for that?

The center inside him last year has a LONG history of being found in the middle third of the field defensively, instead of in his position. He's still doing it when he plays this season...
His winger can just stay out, but the try will be scored where the center isn't. So the winger rushes in, catch and pass and try.

Sio is a passable first grade winger - but nothing special, and I'd be fine with Inu playing wing ahead of him (or Goodall next year). If Sio wants more money than the coaching staff are offering him, buh-bye.
Click to expand...

Sorry mate, you missed my sarcasm cause I didnt include a :roll:

The three things I listed are the reason all the haters are on Vai this week, just as they were on Sio when he was hated last year.

I like the idea of signing DCE, but I can't see how we can have 2 over a million dollar players and still have a competitive team. Can anyone explain this to me pls.

You're basically right, Ram but I guess it depends a little on what the salary cap is for those future years. The cap is a couple of million higher than a few years ago, so I guess there's an outside chance.

Or we could just sign them both and wonder why they don't do so well when playing with Spider McGuirk and friends.

TheRam said:
I like the idea of signing DCE, but I can't see how we can have 2 over a million dollar players and still have a competitive team. Can anyone explain this to me pls.
Click to expand...

Exactly mate. It's pointless having some of the game's best players in your team if you're paying overs for them all. The salary cap means team balance is all about value, which could mean just having 17 solid first graders with a couple of Origin and Kiwi reps sprinkled throughout.

Manly didn't win two premierships because they had DCE in the team, they won them because they weren't overpaying him (or anyone else) and could surround him with quality.

I'd rather Manly overpay Cherry-Evans than for us do it. He's a good player and worth a lot of money, but on massive overs what's the point?
B

TheRam said:
I like the idea of signing DCE, but I can't see how we can have 2 over a million dollar players and still have a competitive team. Can anyone explain this to me pls.
Click to expand...

It's hard to imagine a player being much whiter 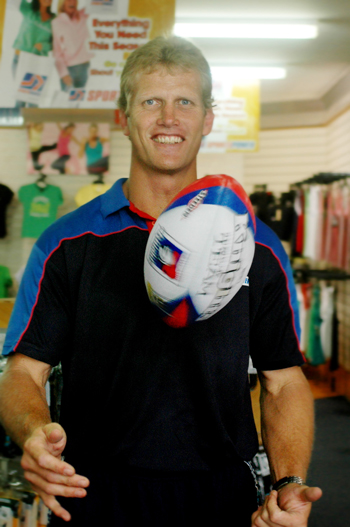 Throw in the Burgess brothers, the Morris brothers for EC & JE, Kieran Foran for that pretender KK, Jake Friend for JM and you have one hell of a premiership winning team. ;-)

I reckon he dropped that after the photo was taken.