When all is said and done, there can be only two candidates. Jack Gibson and Wayne Bennett.
So who is the better coach?

Impossible to compare, both are without a doubt in a class of their own though, and the best in their respective eras
B

There are many variables as others have said.
Is it even really down to these two candidates?
Should the field be expanded to include some of the coaches from the games formative years?

Anyway, taking it down to them two, there are similarities, Bennett had the star studded Broncos teams of the early 90's in parallel to Gibsons Eels in the 80's who were arguably the co-team of the decade along with Canterbury in direct opposition to the Eels.

I will say Bennett and I will justify myself along these lines:

Longevity
Gibson achieved sucess with Easts in 74 and 75 and then again with Parra in 81,82,83.
5 titles in pretty much 10 years is nothing to be sneezed at, not taking into account he took Saints to the decider in 1971.
Like Gibson, Bennett first had to taste defeat at the senior coaching level before tasting success losing on GF day in 1987 as the co-coach of Canberra.
Following this he also had a brace of titles between 92,93,97,98 and 2000, 5 titles in 8 years, although the legitimacy of the super league one can be argued as technically it wasn't the official competition.
What has set them apart is the two Bennett has captured in the next stanza of his career, knocking off a cheating storm in 2006 and taking Saints in from the wilderness in 2010.

In the modern professional era of the game, the 19 or so seasons between Wayne's first title and his latest are a testament to longevity and professionalism.
They share other parallels, they both got pumped in state of origin to the tune of 3 zip, they both came back to win a series after - Bennett many more a series to be exact.
Perhaps it is at international level that some differences exist with Gibson never having a lot to do with it directly and Bennett having both tasted success and defeat at that level, as coach of Australia and what was later essentially coach of the Kiwi team and he wrested the world cup trophy from Australia for the first time since the 1970's.
Probably summing it up, I don't think Bennett is done yet.
Whilst "who is better" is arguable for now (barely) I think one more title should just about nuke that argument.

Different styles, Gibbo was a revolutionary, he brought in many new techniques into the game, not only was he successful but he changed the game. Looking for the next advantage and bringing methods into the game.

Bennett uses tried and true methods. Good quality props, strong defense and getting the most out of individuals. Something has to be said for using old fashioned methods.

Coaching imo is more than just the premierships you win. I think Gibson is the games most influential coach far more than Bennett but results wise Bennett wins.

Did wonders for Lee Hookey's career, especially on the massage table.


I trump your Craig Coleman with Paul Langmack!

I think the thing in Bennett's favour is that he has had to adapt to coaching full time professionals. He won two titles when the game was semi pro and has continued to win as the game, and the athletes, have evolved dramatically since 1995. And I think it's fair to say he has done this without actually revolutionising the game himself in any major way, which is actually impressive. Some coaches can find success by coming up with a way around the rules or by exploiting something, like the Roosters with their super fitness back in the early 2000s, or the Storm with wrestling (not to mention breaking the cap). But Bennett has more or less just played within the rules and adapted his coaching to the trends of the time.
P

The common denominator with Gibson and Bennett is Ron Massey - maybe it is him?
C

There is no doubt Bennet is a great coach and will be remembered as one of the best when it is all said and done. I am not convinced he is the best of all time though.

Of course his longevity and his game plans that garner constant success is something to be admired, however I do think that he had more than any coach could of asked for whilst working at the Broncos in terms of players, money etc.. I have no doubt that other coaches would have secured premierships with those Broncos sides. Whether they would have got 6 premierships is debatable.

With St George, it is not as if he has taken an unsuccessful team and turned them into contenders. The seeds were already there. Saints have under achieved for the best part of a decade and they were more often than not in the top 8 before Bennett go there. Of course Bennett has to be given his props for turning them into a consistent outfit but again, I think there are other coaches that could have done the same.

Admittedly I dont know enough about the quality/circumstances of the teams that Gibson coached to premierships so I cant really judge him.

has to be bennett.. he was the only one good enough out of the two to win a premiership with the mighty dragons!

muzby said:
has to be bennett.. he was the only one good enough out of the two to win a premiership with the mighty dragons!
Click to expand... 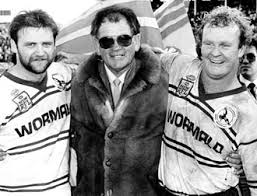