Opinion Is Ricky Stuart the most overrated coach ever?

mongoose said:
surprised how low Cleary is, he must have been under 50% before the start of 2020...
Click to expand...

The Warriors were a basket case before he started, rebuilt Penrith and then had an ordinary season that saw him fired, went to Tigpies and performed like a Tigpies coach. Came back to Penrith had a pretty poor 2019 and then the past two decent seasons.

Hard to know how good a coach he is.

Of the four above him only Hasler had to rebuild a shambolic club in their first gig (turned his next club to shambles though at the end).

Robinson and Bellamy came in off bad seasons the previous year but had pretty solid rosters.

Stuart is actually pretty lucky in that he started off with a loaded premiership level squad with a gun like Freddy. I just looked up his coaching stats and the decade from 2005 through 2015 is insane.

Captain Apollo said:
So what? I'm not making my living being a professional rugby league coach.
Click to expand...

Exactly. So why should we even both hearing your uneducated opinions on the matter of professional rugby league coaching. LOL.

Good to see an article address the issue of Ricky Stuart's position at the Raiders, as opposed to Kent, Hooper, Crawley, etc, who couldn't ever say a bad word about their mate. 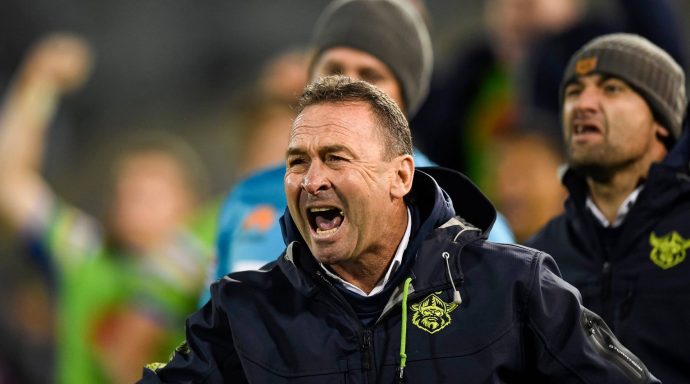 Here we go again, Raiders fans. The 2021 NRL season started with so much expectation for the Green Machine, but...
the-riotact.com

The most obvious sign of a coach's greatness is how many LU threads he gets.

After defeating the high flying Brisbane Broncos sticks back

The man must do a mean BBQ

mave said:
The most obvious sign of a coach's greatness is how many LU threads he gets.

I'm tipping Barrett will challenge soon though.
Click to expand...

Kev "The man to restore pride & save brisbane" Walters wanted to say hi.

Pretty big win seeing we were without our superstar centre again.

Narrowly beaten by a title contender.

Stick is still top 10000 rugby league coaches of all time

Ricky knew the raiders weren't going to win, so just chucked the 18th man on for shits and giggles

Pete Cash said:
Going down by 2 points to competition heavyweights the dragons shows stick has the team right where he wants them
Click to expand...

Yes I think the Raiders are primed and ready to go , I for one will be sitting back watching in awe of the great man

And when he’s ready to go, be that next week, the week after, next year, next decade… hooo boy.. it’ll be major

And when it does happen, as the kids like to say, make sure the apology is as loud as the disrespect

Stick is still top 10000 rugby league coaches of all time
Click to expand...

Sits comfortably at 8734 between Trent Barrett and Mary McGregor

It's time to go

Let's see Ricky's friends at NRL360 try to bail him out.

Braith Anasta was labelled the most overrated player for years. This is how much it hurt him
3 4 5