Pressure on the NRL to make an example of Api the silly Chappy.

Apparently breached the bubble twice with a side chick.

Api’s got a wife and kid.

What a scum bag.
P

Apisai this is the lowest of the low act, your wife is a 10/10 stunner and with a little child as well

Pretty Penny said:
Apisai this is the lowest of the low act, your wife is a 10/10 stunner and with a little child as well

You are fully cooked merkin. Got a laugh out of me though.

Perhaps the worst thread to avoid the cave in LU history. A touch of destiny involved I reckon.
P

Even as a Panthers fan who thinks Api is essential to our chances of somehow getting over the Storm this year, the book needs to be thrown at Api

If this story has substance and the investigation finds Koroisau has breached the protocols then he must be made an example of as per Paul Vaughan. The message is not getting through to some whether it is blatant disregard to the rules, inflated egos, not understanding them or whatever other reason. The whole comp relies on all concerned to stick to the rules , it is that important. The QLD Chief Medical Officer said this morning she is very close to revoking the NRL exemptions to keep the game afloat. When names like the Saints BBQ boys, Jai Arrow and now Koroisau get a mention, the term knucklehead comes to mind.

And you have to feel for his wife Amy!!!
She has been left holding the baby. Literally!!! 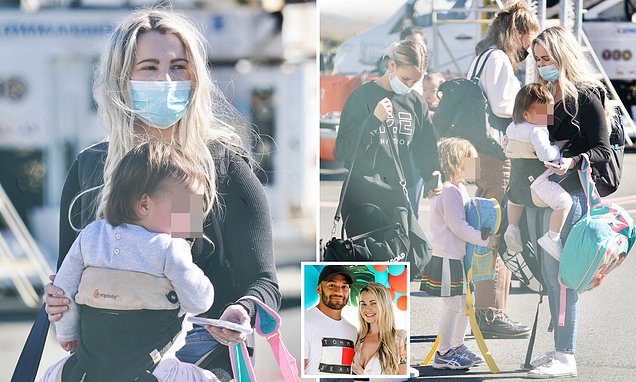 Daily Mail Australia revealed on Thursday that State of Origin debutant Apisai Koroisau put the entire NRL competition at risk by smuggling a woman he met online into the players' hotel.

Koroisau allegedly snuck the woman into the Blues camp on June 20 - one day before the team was moved to Kingscliff, in northern NSW, to escape Sydney's rampant Covid outbreak.

The married father-of-two allegedly also met up with the woman on a second occasion, on the day of Game 2, when the team was in a 'bubble' to prevent any potential exposure to the virus.

The woman claims Koroisau gave her 'strict' instructions on how to sneak into camp without being noticed.

The woman, who asked not to be named, said she met Koroisau on Instagram in June, and he quickly prompted her to message him on Snapchat instead.

Over the course of a few days and their two meetings, she 'developed feelings' for him, claiming she fell for his 'sweet, nice, caring' personality.

'I actually started to have little feels for him,' she said. 'He came across like such a sweet nice caring guy who gave me a lot of attention and sweet words.. I definitely got sucked in!'

But Koroisau allegedly breached the rules by inviting the woman, who was holidaying in Sydney, into the Blues camp despite the Covid outbreak in the city.

'I was told to message him when my Uber was about to drop me off and walk straight into the lifts, where he would be waiting for me,' she said.

Koroisau was in the elevator when the woman arrived, and ushered her directly up to his room.

They allegedly spent about two hours together before Koroisau told her to leave because he had to return to his teammates - who were all together downstairs.


After 14 days of Quarantine, In addition to juggling three backpacks, Koroisau's wife Amy had her youngest daughter Kalesi strapped to her chest and kept a close eye on her eldest, Miliana, who walked alongside her off the tarmac and toward the shuttle bus.

Amy, who found out about her husband's indiscretion when the woman contacted her on social media last week, travelled with the couple's two young daughters to Coolangatta on the Gold Coast on Wednesday to join her husband and his team.

Finally something to move onto after BBQgate. Watch Kent, Hadley and Hooper spin this as Api being the victim of a mental health issue for NRL players being trapped in a bubble for extended periods, because only rep players or players from top 4 teams have so much mental pressure mounted on them.
P

A pathetic man-child, with no impulse control and a sense of self-entitlement.

Very sad to read how his wife Amy felt, she is absolutely shattered, understandable 100%. Lovely wife and 2 kids, smh. Some blokes don't know how lucky they are, and have the morals of an alley cat, maybe worse. Api Cant keep it in his pants...

Rugby league player cheats on his mrs with some thing.. Non story. Be more surprised if it was a story about a league player showing decency and having a moral compass

Another victim of social media !
P

MY KOROISAU, WIFE OF APISAI KOROISAU

Penny Panthers star Apisai Koroisau has previously credited his wife Amy as the rock that helped him move through his grief after the sudden death of his first girlfriend.

The pair welcomed a daughter in February, 2017, and he told the Daily Telegraph that the little girl was his best blessing so far.

'She's a huge inspiration and why I've been playing some good footy. I'd have to say it's the best I've ever felt with my footy - on and off the field. I want to rush home each day to my little girl,' he said.

The couple married in October, 2017, and enjoyed two ceremonies due to Api's Fijian heritage.

'The first wedding we had on Plantation Island was on a Saturday. It was absolutely outstanding,' he said.

'We then followed it up with a more traditional Fijian culture wedding in the village on the Monday. We left for the honeymoon on the Tuesday.'

Following the launch of the season, Amy posted a heartfelt tribute to her beau.

'Your footy season finally starts today and I just know you are going to kill it. You've been working so hard for this and i can see a positive growth/change in your mindset both on and off the field. A change for the better,' she wrote.

'Here's to another chapter of our lives and a massively successful one at that. I love you.'

Well he doesn't love you back Amy. Clearly!!!

Pretty Penny said:
Apisai this is the lowest of the low act, your wife is a 10/10 stunner and with a little child as well

You have left out he has let down God.

Munted said:
I think our best chance was last year, we didn't have any of the distractions/injuries you just listed. We were pretty much full strength for 95% of the games in 2020.

Not so consistent this year with origin, injuries, suspension, and now JFH, Api's dick getting too hard and Cleary injury which may or may not work out for us. He could come back and be targeted, nail his shoulder and be f**ked.
Click to expand...

Agree, I was devastated at half time in the GF last year since it was the best opportunity we'd get for a while and the odds of having such a good team fully fit again are pretty slim.
B

This Year? said:
Finally something to move onto after BBQgate. Watch Kent, Hadley and Hooper spin this as Api being the victim of a mental health issue for NRL players being trapped in a bubble for extended periods, because only rep players or players from top 4 teams have so much mental pressure mounted on them.
Click to expand...

If I'm disappointed about anything, it's that the news didn't come out between Monday and Wednesday so I could watch the boofheads pontificate about it for half an hour on the show.

June 20: Api Koroisau and the woman begin private messaging on Instagram, but Koroisau quickly directs the conversation to Snapchat
He allegedly tells the woman he is in Blues State of Origin camp in Homebush, and asks her if she’d be interested in ‘sneaking in’ to see him
June 21: Koroisau and his team fly to Kingscliff to escape Covid in Sydney
June 26: Koroisau allegedly contacts the woman again to ask if she’d like to see him again, this time in Brisbane
June 27: The woman checks in to her own hotel room in the Sofitel Brisbane, where the team is playing, after Koroisau allegedly tells her he has been assigned a roommate
That afternoon, Koroisau allegedly arrives at the woman’s room to ‘sleep together’ prior to the match
June 27 evening: Koroisau leaves the room, taking a key with him, to join his teammates and head to the game for an 8.10pm kickoff
June 27 midnight: He allegedly returns to the woman’s apartment about midnight, after his team won the match
June 28: Allegedly slips out of the hotel room about 6am to join his teammates
Later sends the woman a message telling her that he will be deleting Snapchat and not to contact him on Instagram as ‘his wife checks it’
Koroisau reportedly says he will ‘be in touch’ again ahead of match three, when he is back in camp
July 8: Koroisau allegedly messages the woman again to organise to catch up back in camp ahead of game three
He allegedly tells her to ‘come over about 9pm, after dinner with the team’ but backtracks just hours before she’s due to arrive after Queensland Maroons star Jai Arrow is dismissed from his squad for breaching the Covid bubble
Both Koroisau and the woman reportedly mutually agree that he should not jeopardise his debut to see her
July 17: The woman informs Koroisau’s wife of the alleged affair

Tyrone May is disgusted with Api's behaviour, apparently he didn't even film it.
P

Penrith hooker under investigation by the NRL for bio security breach.

In unrelated news, Penrith Coach is the first NRL coach to come out publically and praise PVL for Australia’s withdrawal from the World Cup…

Panthers have the Storm in 2 weeks, my guess is Korisau will be available for selection.

The Penrith Panthers are a protected species, the NRL wont jeopardize the finals series, they will throw a team outside the 8 under the bus tho, one not capable of playing in the finals. V Landys will do everything in his power to protect the Penny Panthers.

Qld Health are a different matter though

with all the wives / girlfriends there in the bio bubble, wonder how many cases of the “Wayne Carey / Anthony Stevens toilet tryst wife sharing will we have?

I wonder how many clubs swing

For the uninitiated. swinging is where you swap partners. I reckon there would be many clubs who will share their wives around in lockdown.
B