Surely Hunt gets another maroon jersey after that
J

St Tangles said:
Effort has been there so far

Just some dumb plays holding us back

Ramsay needs to work on his simple mistakes

Need a bit more from the forwards and halves

Centres are trying but to slow
Click to expand...

I thought willame was good.
J

Dragons-4Life said:
I didnt see the tackle for Ravas charge, but if hes done it again what a dumb ass.
Click to expand...

I just looked back at it didn't see anything

Dragons-4Life said:
I didnt see the tackle for Ravas charge, but if hes done it again what a dumb ass.
Click to expand...

Gareth67 said:
Good win , showed true fighting spirit in the 2nd half , that plus a number of great individual displays .

I tipped them but with very little confidence. It was purely on the back of Sloans debut and hoping they would fire up after last weeks poor effort. They got it done, just.

jeffdragon said:
I thought willame was good
Click to expand...

Didn't say they were bad
Just not quick enough

A great victory coming from well behind. Ben Hunt was sensational and was the difference.
It will be great to get Lomax back & nail those kicks for the critical points.
S

JDB man of the match for me, the lines he ran were quality and his defence was great.

He chopped Papali down like a twig. Insane technique
D

Forbes Creek Dragons said:
I think I have every weekend booked in for the next 3 months so that should get us to the GF.
Click to expand...

You working has paid dividends in more ways than one.
B

Shit win against a another shit side .dont get to excited.
D

Forbes Creek Dragons said:
That was a very exciting game, I'm going to have to keep working my arse off.
Click to expand...

Dragon David said:
You working has paid dividends in more ways than one.
Click to expand...

I can barely walk my legs are so stiff. I’ll put in a similar effort tomorrow to bank some Karma. I’m too injured for this stuff though.

Coffs dragon said:
A great victory coming from well behind. Ben Hunt was sensational and was the difference.
It will be great to get Lomax back & nail those kicks for the critical points.
Click to expand...

A Hunt, Bird, Lomax, Rava combo is salivating. I can also see a nice combo building between DeBelin, Macca and McGuire.

Bloodbath said:
Shit win against a another shit side .dont get to excited.
Click to expand...

Its comments made during the game mate.
Yes, it wasnt pretty, but we won.

I doubt anyone is "excited". Just fricken happy for 2 points.

Inisai Toga said:
That move that resulted in Billy Burn’s try off Ben Hunt was an exact replica of John Jansen‘s try in the 1977 Grand Final replay off Bruce Starkey nearly 44 years ago. Wonder why it took them so long to use it again … ?
Click to expand...

Good win.
Liked the fact they didn’t panic & played smart in the second half.

Hunt, outstanding. JDB getting better. Macca was Macca. Norman good in patches, if he was quicker he’d of made at least 6 breaks.
Sims was strong. Kerr better. Some good things from Burns. Jack as usual, physical. Sloan will only get better.
I can’t understand how C Sutton gets a ref gig, he’s challenging Klein as worse. When a player is picked up off the ground tackle is complete yet he allowed 4 players to pick Rava up & drag him back in goal. The penalty against Billy at the death for ruck infringement was pathetic. Both these decisions could have been dire & most likely would have if playing a better side.

TruSaint said:
Its comments made during the game mate.
Yes, it wasnt pretty, but we won.

I doubt anyone is "excited". Just fricken happy for 2 points.
Click to expand...

I was yelling at the Tele, I thought it was great not pretty but great

We beat the Raiders!!!!
You little beauty!!!
Enjoy this one, well done.
Hunt, JDB both outstanding.
Sloan was excellent on debut for a young kid.
So happy.
G 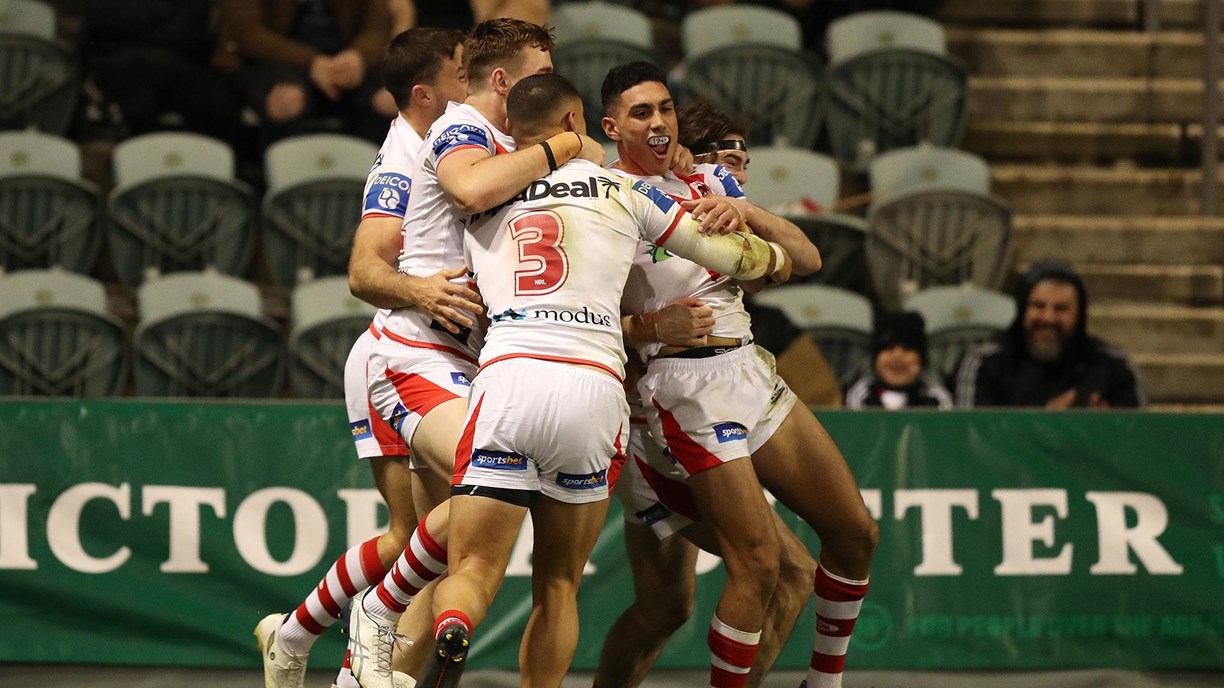 
Gone with the wind: Dragons harness gale to run down Raiders​

A late try by unwanted five-eighth Corey Norman snatched a 22-20 victory for St George Illawarra and saved NRL officials needing to decide whether to strip two points from Canberra for the illegal use of 18th man Xavier Savage at WIN Stadium.
Savage was thrust into action at the start of the second half after Raiders centre Sebastian Kris failed a HIA but under NRL rules the 18th man can only be used if a team suffers three HIAs or loses a player to an incident of foul play for which an opponent was sin-binned or sent off.

Kris appeared to receive a poke in the eye from St George Illawarra winger Mikaele Ravalawa but Jack Bird was placed on report and the rookie centre left the field for HIA in the 40th minute.
Raiders captain Elliott Whitehead told referee Chris Sutton at the resumption of the second half that Kris had failed his HIA and team-mates ran over to congratulate Savage as the 19-year-old winger was sent out for his first taste of NRL action.


However, Savage was pulled from the field 12 minutes later and the NRL has asked the Raiders and ground officials for a please explain over the incident.
“The rules are clear that an 18th man can only be activated if a player is sin-binned or sent off - or a team has three failed HIAs,” an NRL spokesperson said.
“The Raiders incorrectly activated the 18th man at the beginning of the second half.
“The NRL has asked for full reports from the Raiders as well as our staff on duty at the ground to ascertain the circumstances which led to the 18th man being incorrectly activated.” 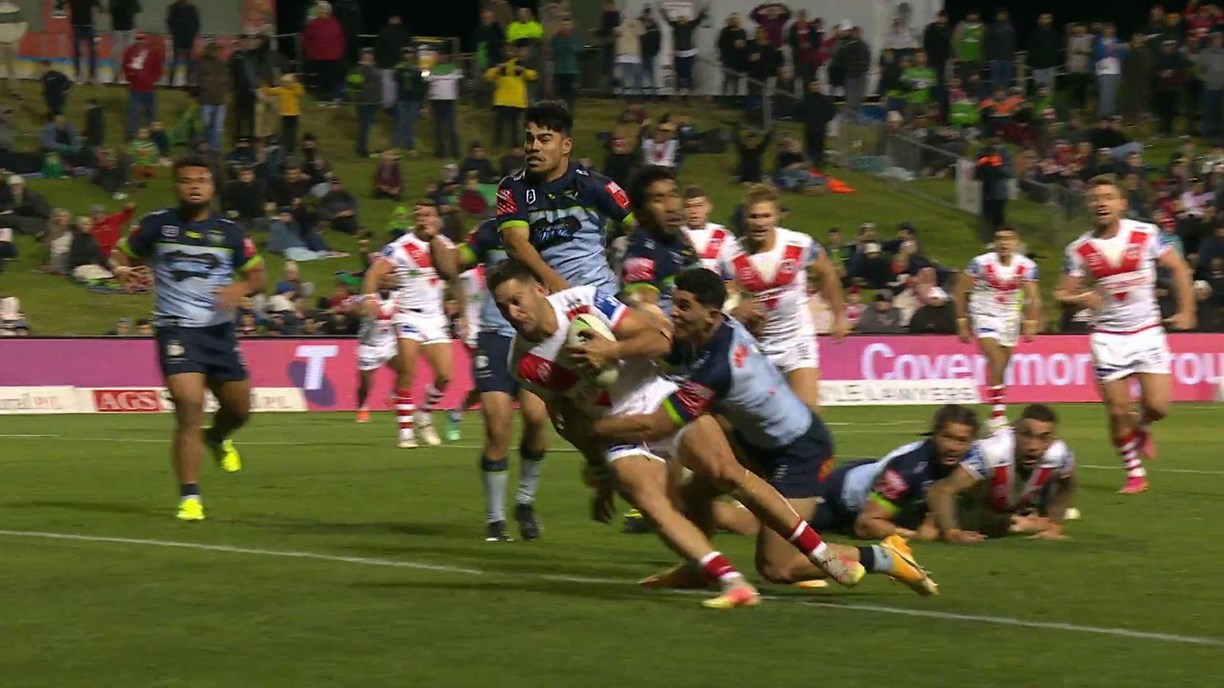 Vaughan offloads in traffic for Norman


The Raiders took advantage of the roaring southerly wind at their backs in the first half to dominate the early field position and race to a 12-0 lead after two converted tries in the opening 20 minutes.
Kiwi second-rower Corey Harawira-Naera crossed for the first in the 10th minute when he brushed aside an attempted tackle by Norman and Kris scored 10 minutes later after Canberra captain Elliott Whitehead spun out of two tackles to put the centre over.


Kris looked set to extend the Raiders' lead in the 27th minute but a try-saving tackle by rookie St George Illawarra fullback Tyrell Sloan stopped him short of the line.
Kris then turned try-saver at the opposite end of the field when he intercepted a Gerard Beale pass on the Raiders line after a blindside break by Hunt.
However, the Raiders couldn’t stop replacement forward Billy Burns from scoring after Hunt sent him on an angle run with a perfectly timed pass in the 32nd minute.


The controversial incident which led to the confusion over Savage’s eligibility enabled Sam Williams to extend Canberra’s lead to 14-6 just before halftime after Bird was placed on report.
The Raiders went further ahead when English forwards Josh Hodgson and Ryan Sutton combined to put Joseph Tapine over for a try in the 44th minute but with the wind now favouring the Dragons it was going to be a big ask to hang on to the lead.
Beale started the fightback when he crossed for a 50th minute try after Hunt again ran the ball to the line and Sloan then scored two minutes later after kicking ahead for Norman to regather and put the teenage fullback over for his first NRL try.


https://www.nrl.com/news/2021/06/19/gone-with-the-wind-dragons-harness-gale-to-outlast-raiders/
You must log in or register to reply here.