mxlegend99 said:
The only thing I have issue with being said is Fish saying this is the greatest Panthers team ever.

The 90/91 was pretty f**king special. If not for losing a player tragically through the year they could have probably had a bit of a dynasty themselves. This is our most successful team ever. But you can't ever really compare it to the 90s potential success due to the circumstances which tore them apart.

Eels like to call themselves our bigger brothers. So a few of us now said we're their daddy's. Than backed it up by giving them a big lesson on the biggest stage of all. The comments by players are all in good fun. The we hate Parra chant is just everyone jumping in on a fan started chant. Eels fans not long ago were doing the same shit to the Bulldogs. I doubt many Panthers fans actually hate Eels though. I got so many Eels fans as mates and it's all in good fun stirring each other. Given location to each other it's impossible for Panthers and Eels fans not to crossover with friendships. Or even in relationships. Although i haven't really given any of my mates shit after this win because i remember how 2020 felt. And none of them were really dicks about beating us twice in the regular season.

Api mocking the Tigers wasn't even that bad. He just had a chuckle saying he hopes they can send him out a winner too... The chuckle being because his teammates have been giving him shit about joining them and not playing finals footy again.

That said it's good that we're painting targets on our backs to create rivalries with other clubs. Being the hunted seems to work for us and helps keep the guys performing consistently. The regular season especially must get difficult to maintain the efforts they were putting in every week even for games with nothing on the line. Ivan actually got us performing for every match and had us fully fit and healthy for finals still. Took a bit of luck to manage the season that way. But a lot of effort to be so far ahead of the competition we could plan for finals weeks in advance.
Click to expand...

To be honest I didnt think we were much of a chance because I could see how good Penrith were playing against Souths. It was great being there but it was going to take so much to beat Penrith. Yes we beat you guys twice but it means nothing going into a Grand Final The loss still hurts and will hurt for a long time, but not as bad as 2001. Ive conceded the fact that Penrith are much better team and no other team would've beaten them on Sunday night.

After the game there were a number of Panthers fans celebrating but also congratulating us Parra fans on a good season and we will bounce back. I thought that was nice. One bloke even shook my hand.

I reckon Ive copped it more from neutral fans than Penrith fans about the loss.

I was near the chant of the "We hate Parra", didnt seem too many but I was like meh we hate you too and with JFH, well it basically ignites the rivalry even bigger cause the next Parramatta Penrith clash is going to be full on. No doubt both games will be a on Friday night.

Its good to have this rivarly and the NRL has taken it serious. I swear there was one time where we only played you guys twice in the space of 18 months

soc123_au said:
This. I was in year 5 in 1981 which is around the age the team you support becomes the one you stick with for life. Penrith were dire at that stage and pretty much all the other kids were Parra supporters. There were 2 of us that stuck with Penrith and I'd say it's only due to our parents being die hard Panthers that we stuck solid, threat of being 9 years old and homeless can be pretty convincing. lol.
My best mate is a Parra fan and was sitting next to me on Sunday night. I offered him a high 5 when To'o crossed for his first to which he politely declined. I cheered hard all game obviously, but kept a bit of a lid on it for his sake. A lot of that was due to how it felt in 2020 and 1990 and it's not like it's their first rodeo as losers either, so they know the feeling without a mate rubbing in the salt.
Click to expand...

How dare you value your mates, over the panthers dynasty....

Stitch it up son

MugaB said:
Todger, still beats schlong, but Wang beat them all hands down
Click to expand...

The simple yet classic..... member!

MugaB said:
The simple yet classic..... member!
Click to expand...

Generalzod said:
Its great to see that the Cronulla Junior System provided Penrith's with another premiership win..lol
Click to expand...

When the Sharks won their GF, who was awarded the Clive Churchill Medal?

Reflector said:
Was it outrage?

I just found it odd that they focused solely on him, in a code that's always had plenty of indigenous players. Felt like shoe-horned AFL tokenism when it wasn't necessary.
Click to expand...

MugaB said:
Agreed whole heartedly, westies can cheer each other on versus someone else too...
And gutho was a fkn man bout it all, he stood tall and owned that loss in what i saw was grace, extremely humble about the whole situation... if was a pawwa fan (shoot me) nah seriously he done you guys proud the way he took it all... besides GFs dont fall off trees, tge eels had to take out the cows who could have just as easily won that game they didn't prior
Click to expand...

Yeah I am at peace nearly 48 hours on.

GF losses still hurt I have been alive and been too 3 GFs and all defeats they don't get any easier.

But not much you can do when the opposition is better then most premiership teams before them in past 30 years.

I felt more gutted and frustrated for weeks on end last year after the controversial semi final loss.

We went toe to toe with penrith that night and simply had no luck, through decisions, Injuries, bounce of the ball.

MugaB said:
Todger, still beats schlong, but Wang beat them all hands down
Click to expand...

King-Gutho94 said:
Yeah I am at peace nearly 48 hours on.

GF losses still hurt I have been alive and been too 3 GFs and all defeats they don't get any easier.

But not much you can do when the opposition is better then most premiership teams before them in past 30 years.

I felt more gutted and frustrated for weeks on end last year after the controversial semi final loss.

We went toe to toe with penrith that night and simply had no luck, through decisions, Injuries, bounce of the ball.
Click to expand...

Naaaaaaah..... you guys choked then too

yobbo84 said:
Just like Ciraldo became the no.1 targeted assistant coach, whoever is head of high performance at Penrith surely becomes the no.1 target for other clubs?

Fitness and conditioning they are ahead of the other 15 clubs by some margin.
Click to expand...

I think its Shane Flanagan.

ACTPanthers said:
f**k me dead... Oh the outrage at it all!!

I didn't know, but hardly surprising, that Kent had so many alts on this site.

Like I said to someone last night in regards to news corp, you use the DT as bog roll, and you get more shit off the paper.

betcats said:
Yep just from their instagrams I could see the sung a bunch of songs. Sweet Caroline is often played at sporting events.
Click to expand...

Not to mention the fact that it has been a crowd song for years at BOA Stadium, the home of the Carolina Panthers. And I'm more than sure a few of the players follow that side. 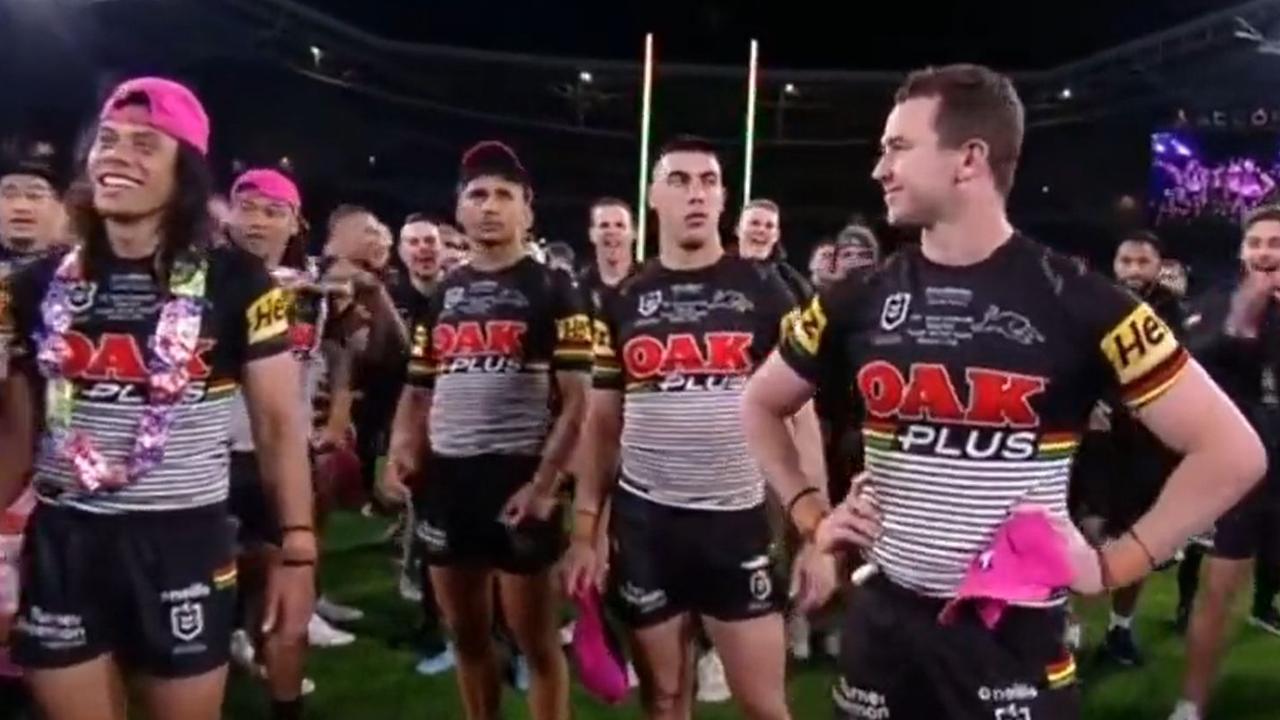 When you have digital cameras that you can freeze frame to the image you specifically want, and put a tag to it, it's hardly rocket science to made any scenario as good or bad as one needs.

Babyface O'reilly said:
I don’t mind players showing arrogance but I’m not surprised at the outrage because it’s how we deal with it in Australia. Take tennis for example. I hate it and think it’s a game for Mosman housewives but we seem to love it in this country. It’s polite and dull which is why I liked John McEnroe because he pissed off the cucumber sandwiches brigade. Look at how Australia embraced Ash Barty’s AO win compared to Kyrgios/Kokkinakis doubles win. People will take boring, beige humble over hutzpah any day.
Click to expand...

Babyface O'reilly said:
I’m not Jewish but I do appreciate how they can nail certain terms with a word. I still can’t think of a better word for penis than, ‘schlong’.
Click to expand...

Paul Kent will do for now. Should use the short version and simply call him a knob.